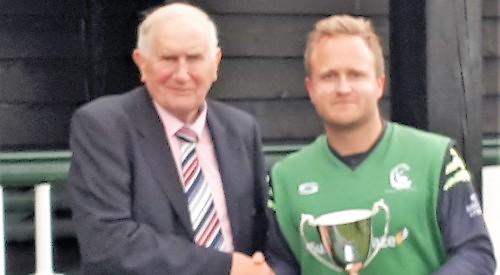 They defeated Devon by 50 runs in the semi-final and then Cheshire by six wickets in the final, both ties taking place at Wormsley on Bank Holiday Monday after rain had prevented any play on Sunday.

Berkshire’s innings against Devon, who had knocked holders Berkshire out of the Unicorns Trophy in June, was a shade disappointing as they made only 138-8 with Waqas Hussain top scoring on 37 and Dan Lincoln 34.

When Devon reached 68-2 after 10 overs, it wasn’t looking good for Berkshire, however, the spinners then got to work and Devon lost their last eight wickets for 20 runs, finishing on 88, of which Gary Chappell contributed a breezy 43 from 27 balls.

Cheshire were also undone by Berkshire’s deadly spin attack and could only manage 130-6, with Peploe taking 2-25, fellow left-armer Raja 2-28 and Birts 1-25. Peploe, opening with Hussain, then impressed with the bat, producing a sensible and restrained innings.

The pair put on 57 in seven overs before Hussain was run out for 30, while Peploe completed a 41-ball half century and went on to make 52 off 46 balls before being caught behind.

Berkshire also lost Woods for 13 and Richard Morris for 16 before Lincoln and Andy Rishton saw their side home with eight balls to spare at 131-4.

Not surprisingly, Peploe was named the man of the match and he received the trophy which Berkshire CC secretary Roy New had donated to the MCCA for T20 cricket a few years ago.

Skipper James Morris commented: “To win a trophy in all three formats in the past 12 months shows how adaptable a side we are.

“We learn quickly and like to think we have all bases covered and we can deal with whatever is thrown at us, as today showed.

“Against a good Devon side, it was particularly pleasing the way we bowled and fielded. We put in a lot of work to get there and in all honesty, I felt we were the best side in the competition.” Cheshire captain Rick Moore said: “Berkshire’s record speaks for itself. It’s fantastic. They are a very well organised and well-drilled side.”

Having defeated Cheshire last week, Berkshire are five from five and nicely poised to retain the Western Division title, as they need to take just 10 points from their remaining fixture against second-bottom Dorset at North Perrott which starts on Sunday (10.30am).

However, they will be missing the two Morris brothers and Nugent all due to work commitments, leaving wicket-keeper Stewart Davison to take over the captaincy.