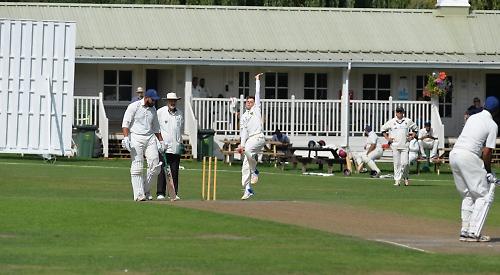 AN unbeaten century from Will Legg was not enough for HENLEY 2nds as his side fell to a five run defeat at the hands of NORTH MAIDENHEAD on Saturday.

The result left the hosts bottom of Division 1 with one game still to play, away at Gerrards Cross tomorrow (Saturday).

Maidenhead batted first and they got off to a bad start as seamer Simon Wheeler took the wicket of both openers, Saeed Bukhari for a duck and Shafiq Khan for seven runs.

This brought Shahzad Asghar to the crease, who hit four fours in a score of 20 before being bowled by Zac Jones.

But it was Imran Butt who anchored the innings, hitting 109 runs off 120 balls before being caught by Jones off the bowling off Chris Ellison.

Sahaan John with 38 runs and Majid Khan and Qamer Shan both with 26 runs helped the visitors to 268-8 off their 50 overs.

In reply, Henley made a solid start with the opening pair of Ellison and Tom Oldershaw.

Ellison made 23 runs off 22 balls before being caught leg before wicket while Oldershaw’s innings was caught after hitting 61 runs off 60 deliveries.

Legg, in at number three, amassed 111 runs off 135 balls, including 10 fours and, despite a useful partnership with Charlie Homewood, who made 33 before being bowled, he could not get his team over the line as three more wickets fell cheaply.

In Division 2A, James Frost picked up five wickets as KIDMORE END bowled out AMERSHAM 2nds for 215 runs with more than eight overs remaining.

Frost picked up both openers, who scored nine runs each, to get the hosts off to a good start. But Oliver Haddock, in at three, and Ross Haines, number five, shared a stand of more than 100 runs.

Haddock made 54 runs, off 41 deliveries, before being bowled by Abid Ul Wahab while Haines hit 82 off 80 balls, caught by Zac Leonard off the bowling off Guy Ashby, the first of his three wickets.

Frost then mopped up the tail, claiming three more wickets, two of which were with their first ball.

In reply, Kidmore confidently reached the required total within 40 overs with the loss of just four wickets.

Openers Jeff Sheldon and Jake Leach made 33 runs and 30 runs, respectively, before being caught out.

Ul Wahab then smashed 63 runs off 60 balls, including eight fours and a six before also being caught out.

After Ashby fell for eight runs, this brought together Zac Leonard and Gregor Hearn, who saw their side home, notching 44 runs and 17 runs, respectively to secure the game by six wickets.

In Division 2b, WARGRAVE slipped to a narrow defeat to HURST by three wickets.

Mark Firth steadied the ship, compiling 47 runs in more than an hour in the middle, including six fours, before being caught out.

Michael Cowdell added a useful 20 runs before he, too, fell, but Neal Robinson then top-scored for his side with an undefeated 66 runs from 81 deliveries, including eight fours and two sixes.

But Robinson ran out of batting partners as the remaining five batsmen added just 24 more runs between them, as Wargrave ended on 209 all out from their 50 overs.

In reply, Robinson was back in the thick of it, removing opener Alex Kayser, clean bowled for 34 runs, while Sohi removed his batting partner, Tim Walder for just two runs.

But it was James Watt, in at number three, who took the game away from Wargrave with a knock of 93, but eventually fell, caught Malik off the bowling of Jack Clark. Wargrave picked up four more wickets but Oliver Lovegrove saw his side home with an unbeaten 41 runs.

In Division 4A, HENLEY 3rds lost to BINFIELD by 106 runs in a match that saw centuries from batsmen on both sides.

Binfield batted first but were in trouble early on with both openers falling cheaply. Alex Harris-White bowled Wynard Lamprecht for two runs while Mike Staves was caught by Ashley Hayden for nine runs, off the bowling of Andy Chappell.

But Chris Morgan punished Henley’s bowlers, hitting 141 runs before being bowled by Hayden, for the first of his two wickets.

Tom Andrews and Duncan Wessels hit 34 runs and 40 runs to help edge their side up to a total of 287 before they fell to John Neville and Luke Loveland, respectively.

In reply, Henley opener Matt Dalrymple set the foundation for a successful run chase, hitting 123 not out.

But no one else in the side could stick with him, with only one other batsman, Adam Lubbock, making double figures with just 10 runs.

Six of the batsmen were sent back to the pavilion without troubling the scorers and, with the help of 33 extras, the side limped to 181 all out within 39 overs.

In Division 5B, WARGRAVE 2nds thrashed BRACKNELL by eight wickets in a low-scoring game.

They then knocked off the required runs within 23 overs, losing just two wickets, with Luke Taylor top-scoring with an undefeated 39 runs.

In Division 7A, KIDMORE ENDS 2nds comfortably beat already relegated THEALE AND TILEHURST by six wickets with Callum Driscoll hitting the winning boundary in the final over.

Earlier in the day Kidmore had invited the visitors to bat first on a wicket which hadn’t suffered too badly from the previous day’s heavy rain.

Theale started positively and whilst not scoring quickly put on 66 for the first wicket before Assad Ul Haq got the initial breakthrough, having Theale skipper Khadim Asslam caught by Luke Sinclair in the covers.

Fellow opener James Martin followed in the next over as Duncan Grant took a well-judged catch at backward point, off youngster Rory Elliott, leaving Theale 66-2.

Theale then consolidated their innings and the next wicket fell on 108 with Todd Butler taking a catch on the run at mid-off, off the bowling of Alex Berry.

Kidmore then managed to keep the run rate in check, aided by a couple more wickets, as Theale finished up on a competitive 217 from their 45 overs.

In reply, Kidmore’s openers Chris Pigden and Mark New provided a solid platform before falling for 23 runs and 26 runs, respectively.

Then when Duncan Grant was dismissed for 21 to a well-taken catch in the outfield from George Coker, Kidmore were 106-3.

However, a 77-run partnership between Luke Sinclair and Rory Elliott ensured that Kidmore maintained positive progress before Elliott was dismissed for 45 runs.

Driscoll then joined Sinclair and the pair took Kidmore to the victory, taking singles, twos and boundaries in an unbeaten 38-run partnership.

Sinclair ended with an unbeaten 66 runs and Driscoll finished up with 22 runs.

This brought Oliver and James Newton to the crease and they steadied the ship. Oliver made 86 runs and James, 34 runs, before both were bowled.

Wicketkeeper Christopher Hattey, in at number six, added 43 runs to help his side make 223 runs off 40 overs for the loss of seven wickets.

In reply, Bracknell started badly, with opener Ashok Badana run out for seven runs and his partner bowled by Scott Morton after making three runs.

Walker then claimed the wickets of the next five batsmen, including two leg before wicket and Joe Warren taking two of his three catches that afternoon.