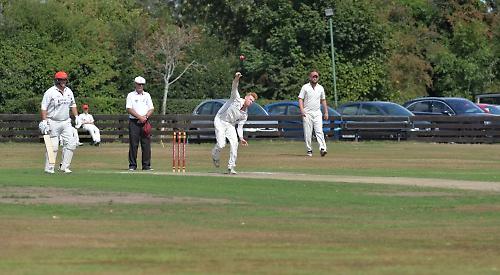 THE visit of champions CHECKENDON to bottom club FARLEY HILL in the Premier Division turned out to be much more tightly contested than might have been expected.

Checkendon chose to bat on a pitch of mainly low bounce which caused some problems and were indebted to the good technique of youngster Matt Heslop, at number three, whose 94 runs, including four sixes and 10 fours, was by far the highest individual score of the match.

The depth of the visiting batsmen provided good support, enabling them to muster a total of 247 runs.

Farley Hill responded with an opening stand of 88 runs in only 12 overs compiled by Ross Ditchburn and Nick Warde.

However, the six-man Checkendon bowling attack ultimately proved too strong, backed up by safe catching.

Debutant left-arm spinner Mayank Kedia caused confusion with his variations and finished with four wickets as the home side’s gallant attempt to stave off the threat of relegation fell 37 runs short.

Elsewhere, Ashok Singh claimed eight GORING wickets as they were blown away by MORTIMER WEST END.

Goring lost the toss and was put into bat and the decision proved to be the correct one as wickets were taken at regular intervals.

Opener Ollie carrier was the only one who looked to have any staying power, making 13 runs from 62 deliveries, before being bowled by Singh for his first wicket.

Max McGee, in at number seven, notched the highest score of the innings with 20 runs from 31 balls and the next man in, Toby Winterbottom, hit 14 runs but their rearguard action didn’t last long as their side limped to 72 runs all out within 32 overs.

Goring’s Peter Slade gave his side some hope, picking up five wickets in Mortimer’s reply but they managed to knock off the runs inside 22 overs for the loss of one more wicket.

Another century from Paul Knox helped WOODCOTE to a seven-wicket win over SANDHURST.

James Worsfold won the toss for Woodcote and put Sandhurst in, a decision which could have rebounded as Sandhurst skipper, Adam Birch, made 94 runs to hold his team’s innings together and saw them to a respectable total of 187 for 9.

The Woodcote bowlers stuck to the task and Will Macdonald claimed six wickets, including that of Birch, and the last five Sandhurst wickets to fall.

After losing an early wicket, Woodcote had a second-wicket partnership worth 143 between Paul Knox, who hit 102 runs, and JP Brouard, who made 44 not out making for a comfortable run chase.

The introduction of Roy Hayden and Ian Jackson brought the first breakthroughs and helped stem the flow of runs.

Woodley again sought to up the pace in the closing overs and it was Mick Chard who cleaned up two batsmen with successive deliveries to prevent any final rapid push for runs.

After 45 overs the home side posted a healthy 257 for 9 with wicketkeeper Gerry Bacon claiming all of the top six batsmen. Five of his victims were stumped, which was a new personal best.

Peppard openers Hugh Asquith and Nick Sedgwick needed to be patient against the old ball, particularly as the pitch had deteriorated further.

Asquith was rapped twice on the gloves before one ball flew over his head for a wide. The pair gradually increased the scoring rate, as Woodley rotated their bowlers without success, and brought up their 100 partnership in the 18th over.

Sedgwick reached his half-century off 44 balls with a chip over midwicket and Asquith brought up his chanceless 50 off 74 balls a short while later.

The partnership was only broken in the 26th over when Hugh was trapped leg before wicket for 57 but by then the partnership had amassed 145 runs. Thereafter Gerry Bacon, 44 not out, gave excellent support to Sedgwick as they hunted down the total.

Sedgwick hit his maiden ton for Peppard off 92 balls and eventually posted his highest ever score of 144 not out off 125 balls including 26 fours. His last century was made 31 years previously in the Yorkshire leagues.

Peppard secured the win with seven balls remaining for the loss of just one wicket and guaranteed themselves fourth spot in the division with one game remaining, having won five of their last six games.