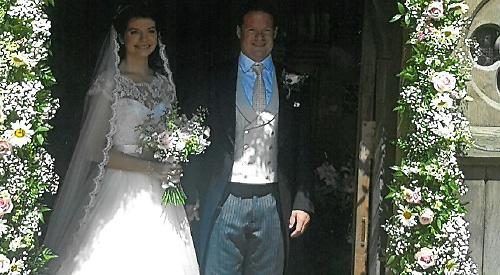 The bride is the daughter of Alan Shenton, of Walton Avenue, Henley, and Noëlle Morgan-Hurtrel, of Greys Road, Henley, and was given away by her father.

The groom is the son of Shirley, from Wilmslow, Cheshire, and the late James Clegg.

Anaïs wore a traditional white dress by Suzanne Neville and her bouquet was made by Ann Laing.

Her diamond engagement ring was from Hatton Garden and the wedding ring was from Harrington & Hallworth. The couple, who arrived at the church in a vintage Rolls Royce, were married by Rev Clive Windebank.

The bridesmaids were Sarah-Jane Wall, Grace and Eve Clegg and the page boys were Henry and Arthur Clegg-Langridge.

They all wore outfits from John Lewis and the bridesmaids carried bouquets made by Ann Laing.

The best man was Daniel Clegg and the ushers were Chris Bentley and Julian Wright. The church speaker was the groom’s uncle, Richard Clegg.

The witnesses at the civil ceremony were Tom Shenton and Daniel Clegg. The reception was held at the Beetle and Wedge Boathouse restaurant in Moulsford.

The make-up artist was Georgina Heron and the photographer was Alexis Knight.

The wedding cake was made by Gatineau, of Oxford, and the wedding invitation cards were from Cirencester Letter Press. A manicure was provided by the Henley Clinic.

The couple, who are both lawyers, had their honeymoon in the south of France and now live in Clapham Common.