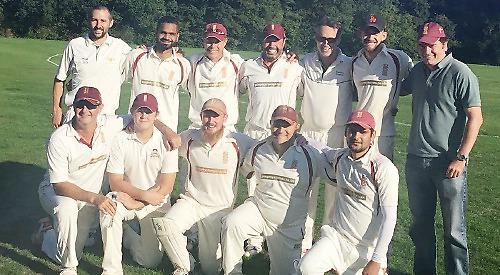 THE eagerly awaited first against second clash between CHECKENDON and BERKSHIRE COUNTY SPORTS in the Premier League did not lack a cutting edge.

The visitors wisely chose to bat first and made good progress initially thanks to Usman Asif’s half-century.

But the orthodox left-arm spin of Ninad Rahatekar then prompted a collapse as he took 6-36, reducing BCS to 146-9 before their last wicket stand took the total to 192 in 44.5 overs.

Checkendon added a further nine catches to their season’s collection but fell short of taking all the chances offered.

As the wear and tear of such a dry summer took its toll on the Checkendon pitch, the home batsmen strove manfully against a high quality bowling attack.

Ujwal Tickoo and Matt Heslop top-scored for the home side but Waqas Ahmed conceded only 17 runs in 12 overs, while spinners Ali Tariq and Arif Asif caused considerable problems.

It was left to tailender Alex Podolski and Tony Breakspear to preserve Checkendon’s unbeaten record in a game marred by the immaturity of a talented visiting side.

Elsewhere, WOODCOTE’S indifferent season ended in the same fashion as they succumbed to a 163-run defeat at MORTIMER WEST END. The result saw the home team secure the runners-up spot while Woodcote narrowly avoided relegation.

In spite of some good opening bowling by Mark Pearson and Paul Knox the hosts got off to a solid start and they continued in that vein to reach 226-7 in their 45 overs. Ryan Van Heerden bowled a good spell to take four wickets, conceding 64 runs, in 11 overs.

On a deteriorating wicket the Woodcote innings crumbled against the pace of Nick Kingston (six wickets for 20 runs in six overs). Paul Knox, with 28 runs, and Ryan Lennard, 13 runs, briefly showed some resistance, but the innings was brought to a close with half the available overs bowled.

Meanwhile, the relegation battle came to a thrilling conclusion as GORING visited SANDHURST in a winner takes all battle. Sandhurst won the toss and inserted Goring on a tricky wicket on which runs were hard to come by early on.

Chris Walsh hit 59 runs and Toby Winterbottom, 54 runs, in a patient innings as Goring scored at only three runs an over for the first 30 overs.

However, when George Taylor came to the crease, the pace changed and he plundered several boundaries in a quick-fire 66 runs that seemed to be taking the game away from Sandhurst and they finished on what seemed an above par 231-6.

With pressure on Sandhurst to come out and chase down the target, Goring knew that chances for early wickets would be available.

Peter Slade dismissed their opener Batchelor leg before wicket in the first over and Chris Winterbottom then claimed the prized scalp of Adam Birch in the second over. Chris then produced a fantastic spell of swing bowling that resulted in career best figures of seven wickets for 12 runs.

Winterbottom and Slade were ably assisted by the Goring fielders who held all catches and an emphatic 185-run victory was wrapped up in less than 50 minutes as Goring bowled out Sandhurst for just 46 runs.

The result meant league survival for Goring and the scale of the victory meant a maximum 40 points and a mid-table finish in fifth place.

In Division One, PEPPARD STOKE ROW 2nds finished the season in fourth place having picked up 35 points from WALTHAM ST LAWRENCE’S concession.

In Division Two, stand-in captain Andy Watts led from the front as PEPPARD STOKE ROW 3rds ended the season on a high with a 67-run victory at home to SHINFIELD 3rds.

Watts, 81 runs, and Rob Simmons, 79 runs, put on 150 for the second wicket as the home side amassed an imposing 277-5 in their 40 overs, with all of the top six which included Hugh Asquith, Daniel Watts, Matt Vines and Paul Vines all passing 20.

Paul Vines then showed his class with the ball, taking two wickets for 19 runs until unfortunately breaking his thumb when attempting a return catch.