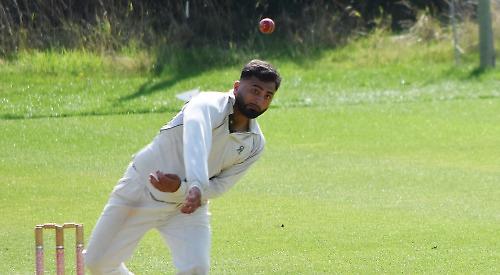 HARPSDEN were asked to bowl first after PENN AND TYLERS GREEN won the toss in their final match of the Championship season.

T Hancock and Khaliq took the new ball and struck immediately, with Hancock dismissing Yates, Biswas and Royce in his second over to leave Penn floundering on 1-3.

Things went from bad to worse for the visitors as Hancock then had Mason caught behind in his next over for eight runs.

Khaliq then chipped in, exhibiting some skilful swing bowling to set up Thompson before he was bowled for two runs.

Cockroft began to counter attack for Penn but after some big hits he too found himself back in the pavilion, missing a delivery that seamed sharply off the bowling of Hancock, who took career best figures of 6-25 from his nine overs.

Khaliq then removed both Lance and Radford and the death knell came with the introduction of Geyton who took two deliveries to dismiss Barber, in at number 10, caught behind as Penn were dismissed for 39 runs inside 19 overs.

But Harpsden’s batting performance followed a similar theme. Lance had opening batsman Imlay caught behind from the first ball of the innings.

Franklin joined Birkett at the crease and the pair set about the meagre first innings total.

Birkett fell to Lance shortly after for five runs and Ward joined Franklin at the crease. The pair accelerated sharply as Franklin found the rope several times before being trapped leg before wicket by Haumann for 23 runs.

B Hancock fell soon after and it was left up to the home skipper Whittaker to hit the final runs as Harpsden ran out winners by five wickets.

PEPPARD STOKE ROW broke their own record for the highest team score but ultimately had to settle for a winning draw and third-placed finish at LEY HILL.

Having smashed 365-5 at home to Welford Park three weeks ago, Peppard were bowled out for 372 runs in 51 overs.

The visitors’ innings began with a flourish as Max Baker-Smith, 37 runs, hit the first two balls of the game for four and he and Alfie Clifton put on 57 runs before they fell in consecutive balls.

Senthil Muniyasamy showed his class in racing to 75 runs from 50 balls, Scott Harris made 52 runs from 48 balls and skipper Rich Ashton made 31 runs from 22 balls.

Ley Hill started well and put on 49 runs for the opening wicket until Craig Peterson received a pearler from Harris, which pitched on off-stump only to nip back and clip the leg bail and, when Josh Perkins took a stunning catch at cover off Sam Fooks and Harris bowled Lewis Thompson, the hosts were 56-3.

However, Ley Hill dug in and ensured a share of the spoils despite the best efforts of Hayden, 2-39, and Craig Ottaway’s 51 runs helped the home side end on 221-7.