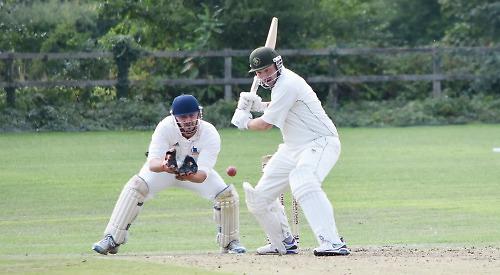 HENLEY 2nds finished bottom of Division 1 following a six-wicket defeat at the hands of GERRARDS CROSS in the final game of the league season on Saturday.

The hosts won the toss and made light work of the Henley batting line-up, picking up all 10 wickets within 30 overs.

Four batsmen made it to double figures with opener Nathan Hopkins top-scoring with 25 runs from 26 balls. But the extras column, adding a further 17 runs to the total, was the next highest score of the innings.

Bowlers Zain Khan and Richard Knudsen were the main tormentors with both picking up three wickets each while Jonathan Denning and Daniel Hampton each picked up two victims.

In reply, Henley started well with Simon Wheeler trapping Andrew Morrison leg before wicket with the first ball of the innings before removing fellow opener Malkeet Dhaliwal the same way for just one run.

James Hammerton, in at number three, then frustrated the bowlers, hitting 30 runs off 54 balls, including four fours in an unbeaten innings.

But Henley was unable to remove Hampton, who hit an unbeaten half-century. His 54 runs, which comprised eight fours and two sixes, was enough to see his side over the line within 22 overs.

In Division 2A, KIDMORE END was put into bat against WINDSOR on another gloriously sunny day.

Jeff Sheldon and Jake Leach started cautiously on what was a soft pitch that aided new ball movement. But once the shine was worn off of the ball, the openers began to attack.

Leach was quick to punish anything short and over-pitched and raced to 48 runs from 37 balls, which included two huge sixes, but was stumped as he was advancing down the wicket.

Abid Ul Wahab, in at number three, was wristy and aggressive as usual and hit 14 runs before he was dismissed and Tom Sheldon also timed the ball well during his short innings of 11 runs. Zac Leonard also looked comfortable before he was bowled for eight runs.

At the other end, Sheldon batted more conservatively. He drove the ball well and kept the score ticking along, despite being denied boundaries by some excellent fielding.

By the time Guy Ashby and Sheldon were batting together the score had reached 148-4. The fifth wicket partnership of 50 was evenly distributed between the pair and was only ended when Sheldon was caught out for his highest score of the season, 69 from 124 balls with nine fours and one six.

Ashby and Oscar Fountain then batted well together, running quickly between the wickets, making the fielding side struggle and tire. This sixth wicket partnership put on 43 runs and took the Kidmore score to 242 with four overs remaining.

Alex Crawford came and went without troubling the scorers and James Frost joined Fountain at the wicket with two overs to go.

Fountain struck seven boundaries in his unbeaten half-century — his first for the first team — which included several off the last few deliveries to bring the total to 267-7 off 50 overs.

In reply, Windsor attacked from the start, scoring 20 runs in the first two overs. But once wickets started to fall, the wheels came off for the visitors.

Azhar Udeen picked up four wickets in a devastating 10-over spell and James Frost took three wickets in six overs. Ashby took one wicket, while Ul Wahab chipped in with two wickets and claimed the last man. Only Adam Weston and Mark Lines showed any resistance, hitting 31 runs and 34 runs, respectively, en route to a total of 131 runs.

Of the 10 wickets that fell, seven were bowled, two were trapped leg before wicket and Ashby took the only catch in the innings as Kidmore won the match by 145 runs.

Kidmore finished fourth in the league, having lost four games all season, the same number as champions Hayes, winning 10 games, including all their completed limited overs matches.

The leading wicket takers were Alex Crawford, who took 31 wickets, and Ashby, who took 28 wickets. Frost was the leading run scorer having accumulated 413 runs, and Leonard was the leading keeper in the league, dismissing 26 batsmen with 17 catches and nine stumpings.

WARGRAVE strengthened their grip on the runner-up spot in Division 2B with a five-wicket win against FINCHAMPSTEAD 2nds. The visitors won the toss and elected to bat. G Loveday top-scored with 106 runs as they posted a total of 241 runs for the loss of seven wickets from their 50 overs.

Wargrave chased down the total inside 48 overs with M Cowdell, 89 runs, and I Malik, with an unbeaten 67 runs, their top performers.

The result left them 18 points behind champions High Wycombe 2nds and a comfortable 28 points ahead of Beaconsfield in third place.

HENLEY 3rds finished bottom of Division 4A after a 74-run defeat at the hands of BOYNE HILL 2nds.

The hosts won the toss and elected to bat, hitting 243 runs for the loss of seven wickets in 45 overs. Asghar top-scored with an unbeaten 58 runs, supported by McClellan, who scored 48 runs, and Bangs, who scored 35 runs.

In reply, several Henley batsmen made starts but they could not stay in for long enough as the side was bowled out for 169 runs within 43 overs.

Hildritch top-scored for the visitors with 40 runs while Dunston notched 34 runs and Hester hit 29 runs.

They won the toss and put their hosts into bat. Some tight bowling restricted Boyne to 158 runs as they were all out within 44 overs.

Wargrave then made light work of the run chase, reaching the total within 28 overs for the loss of just five wickets.

The hosts won the toss and elected to bat and made 244 runs for the loss of seven wickets in 45 overs.

Opener Muhammed Nasir top-scored with 65 runs from 88 deliveries and was supported by the lower middle order with James Nunn hitting 37 runs and Ben Scarborough and Jordan Thomas each making 36 runs.

Kidmore’s bowlers were made to work hard but Rory Elliott, Hamish McNaught and Johnny Abbott chipped in with two wickets each while James Walker was expensive, conceding 62 runs off his 10 overs, for one wicket.

In reply, Kidmore’s batsmen never really got going with only three reaching double figures in the innings.

Luke Gray, in at number four, was the top-scorer with 25 runs before he was caught out and the side was bowled out for 96 runs in 32 overs. The result left Kidmore in a comfortable fifth-placed position in the table.

WARGRAVE 3rds clung on to the runner-up spot in Division 8A after a six-wicket win against HAYES 3rds.

The hosts put Hayes into bat and started well with Scott Morton removing both openers cheaply.

But this brought to the middle Luke Gilham and Shahid Ahmed who frustrated the bowlers with a solid partnership.

Both eventually fell just short of their half-centuries. Gilham was caught by Sam Warren, off the bowling of Emma Walker, for 44 runs, and Shaid was trapped leg before wicket by Kevin Rapley for 48 runs.

Rapley then claimed the next four batsmen in quick succession, including two without troubling the scorers, to finish on 5-37 from nine overs, as Hayes were eventually dismissed for a total of 134 runs.

Wargrave made short work of the run chase, mainly due to opener Sam Warren, who hit 50 runs before being caught out.

Joe Warren and James Newton, who made 13 and 11 runs respectively, were both run out before Michael Hattey was bowled after making 16 runs.

It was then left to Christopher Hattey and Ken Clark to get their side over the line, remaining unbeaten on 20 and six runs respectively.

They inserted the visitors and made early inroads, claiming both openers cheaply.

Upkar Shishodia, in at number three, fought back with 58 runs, but was caught by Todd Butler, off the bowling of Alex Berry.

Wickets then fell regularly with Ian Elliott, Don Norman and Hedley Ruegg all getting their rewards from some tight bowling.

With the last five batsmen only scoring 10 runs between them, Yateley limped to a total of 149 runs from 40 overs.

In reply, Wargrave lost Butler for six runs but Berry and Greg Clark steadied the ship, scoring 33 and 28 runs, respectively.

After they fell, Hugo Guianvarch didn’t last long, hitting five runs before being bowled, while David Eley was trapped leg before wicket for 18 runs.

Ali Baxter and Rhys Tong-Jones saw their side over the line, ending unbeaten on 25 and nine runs respectively, within 32 overs.

The result left Kidmore in a comfortable fourth place.