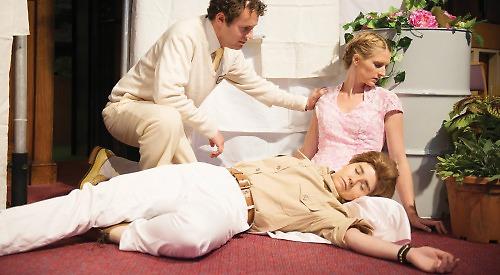 One such example was last Friday’s Opera Holloway production of Vincenzo Bellini’s I Capuleti e i Montecchi (his take on Romeo and Juliet) in association with Henley-based Opera Prelude. As satisfying an operatic experience as one might enjoy anywhere.

Set in 13th century, strife-torn Verona, the Capuleti and Montecchi are cast as rival factions rather than as Shakespeare’s “two households, both alike in dignity”.

Capellio is head of the Capuleti and Giulietta’s father. Giuletta is engaged to Tebaldo, but has also fallen disastrously in love with Romeo, leader of the Montecchi, a fact known only to her doctor and confidant, Lorenzo.

To complicate matters further, Romeo has inadvertently killed Capellio’s son (Giulietta’s brother) in battle. Ample material, then, for an emotionally charged tragedy where there are no winners and a predictably shocking ending. Five promising young singers were tasked with the challenge.

Of these, soprano Callie Gaston stood out with her intense, emotive acting, exceptional vocal technique and sheer musicality. Not only had she mastered her gargantuan part in Italian, but she had the stamina to hold centre stage all the
way through to the final
gut-wrenching double suicide scene.

Complementing her impressively with formidable voices and matching passion were tenor Will Branston as Tebaldo and baritone Samuel Oram as Capellio. And completing the cast of five were mezzo-soprano Sophie Dicks and Robert Garland as Romeo and Lorenzo respectively.

All were ably supported throughout by a first-class piano quintet under the sympathetic baton of musical director Lewis Gaston. The absence of a pit orchestra felt like no loss at all.

If there is a weakness in the opera it is Bellini’s decision to cast Romeo as a female, which cannot avoid detracting from the enormity of the tragic plot. It is also a tough nut for a mezzo-soprano to crack. Sophie Dicks certainly had her work cut out.

That notwithstanding, one cannot help but admire Bellini’s writing — a revelation to those of us unfamiliar with his work.

Dissonance and ornamentation are used to great effect. The score abounds in accessible melody and overflows with solo arias, recitatives and a constant stream of duets, trios and quartets, all topped by one particularly memorable quintet.

Bellini died aged just 33. One can only speculate as to what he might have gone on to achieve.