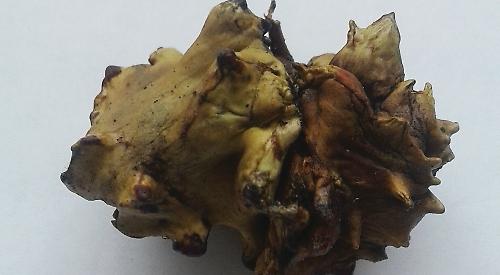 I DECIDED to revisit one of my old childhood stomping grounds, Balmore Walk (or Park as we used to call it) in Caversham.

This is a great little piece of gently sloping park and partial woodland next door to my former home and where my mother still lives.

It has changed quite a bit in some ways but not in others and filled me with great memories.

During the Civil War the area was known as Balmer’s Fields and there was reportedly a skirmish here. Indeed, some cannon balls have been found on the crest here.

After visiting Mum, I go to meet my friend Dave Kenny on the brow of a hill above the Hemdean Valley.

There are still several Austrian pines (Pinus nigra) along the path that lead to our rendezvous and they look in a bit of trouble with many brown, sickly needles. Is this due to our prolonged dry spell, I wonder?

As I await my friend, I see something very odd on the turf under an oak tree. Where I’d expected to find acorns there are lots of deformed and spiny nuts that look like nothing I have seen before.

When Dave arrives, he tells me that the reason for this is the proximity of another tree, the Turkey oak (Quercus cerris).

This is a non-native, ornamental species which plays host to a small gall wasp (Andricus quercuscalicis) whose larvae infect our native oaks and in doing so ruin the production of acorns.

There are also some very old sycamores which are mostly hollow, making them ideal for the tawny owls and bat roosts. The ground here has always been dry so maybe there is a link with these trees and their struggle to survive.

A little further on is an old avenue of limes. Like most of the trees here, they were probably planted when this smallish area formed part of the larger grounds of a big local house, Balmore, probably for decorative reasons.

Before entering a large open area, we check on some ancient field maples and a superb old oak where some Palaeolithic (Stone Age) implements were unearthed in 1931, perhaps during the construction of the houses in nearby Balmore Drive. There is also some butcher’s-broom (Ruscus aculeatus), a stiff-stemmed member of the lily family that bears red berries, and some box (Buxus sempervirens).

In the Seventies there use to be a lone cottage near the oak tree and I’ll never forget the honking of the noisy geese that the owner kept there, thankfully behind a fence.

It has since been replaced by some more recent properties and much more, including two old rusting Nissen huts.

The meadow beyond is big and surrounded by blackthorn. There are hardly any sloe berries on these invasive shrubs and those that do exist are very small in comparison to the norm so maybe very little sloe gin will be made this year.

In summer, when the grasses are at their peak, this little part of the world is full of grasshoppers and sweet-smelling plants such as lady’s bedstraw with its tiny clusters of yellow flowers.

Now it has all been mown, as it is every year at summer’s passing. Once it was all bailed up and taken off to feed Reading’s police horses.

At the end of our walk is a young woodland with a good variety of native trees. Unfortunately, turkey oaks were planted here but I’m happy to say that many of the indigenous trees are setting seed with plenty of saplings present.

This wood was originally planted in 1987 by children from a local primary school but unfortunately a council employee mowed it down by mistake. It was replanted in 1993 and has shot up in the 25 years since then.

There used to be a spring here but it has now largely dried up. How we need some rain.

Leaving Caversham and heading back to Emmer Green, I spy some bats, presumably pipistrelles, flitting about as they scoop up gnats and maybe the odd moth. When I was younger I could hear bats. Alas, I cannot anymore but then it is great to see them.