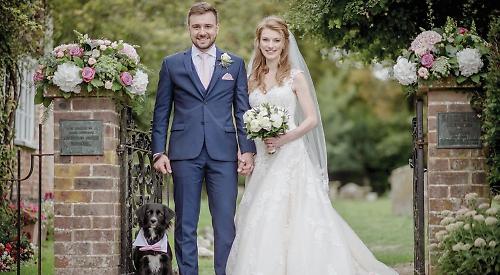 SOPHIE FOIS and Liman Metolli were married at St Mary’s Church in Turville on Saturday, September 8.

The bride is the daughter of Danny and Angela Fois, from Turville, and the groom is the son of Regina Grosier, from Woodcote.

Sophie wore a Pronovias dress and was walked to church by her father accompanied by her bridesmaids Lauren Fois, Jess Beard and Sasha Steventon.

The groom was accompanied by his best man Tom Slough and four ushers.

The ceremony was followed by a marquee reception in Turville, where their dog Badger played his part too. They danced the night away to The Revue band. The wedding breakfast was provided by Jaxon Keedwell and his team from Valley Events, the marquee by Savoir Faire and the flowers by Cherubs Design.

Sophie, a former Gillotts School pupil and now an artist, met Liman, an architect, during an art class at The Henley College in 2011. They both continued their studies at Nottingham Trent University.

The couple will spend their honeymoon in Mauritius followed by a South African safari. They will live in Stadhampton.