Accent on being different was Bard to make out in places 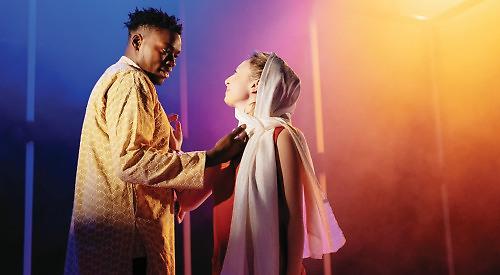 OTHELLO is such a great play that it’s next to impossible to mess it up. Stay true to the characters and the story and you’ll be all right.

English Touring Theatre manage to do that, at least in this production — but they trespass on the play’s hospitality quite a long way after that.

Othello the role is a tough ask for any actor, so Victor Oshin deserves a lot of praise for turning in such a believable performance in his first professional engagement.

We get a man whose emotional life has not developed beyond adolescence with all its obsession, jealousy and pain. This despite his military genius and the respect awarded him.

And we are in no doubt about Iago’s malevolence and inadequacy — a man passed over for promotion in favour of a foreigner. Paul McEwan works long and hard to bring across this complex and unsympathetic character.

But there are reservations.

Fine, we have the characters and the play because no matter what you do Othello relies upon those traits for its power. Perhaps director Richard Twyman thought that as long as he remained faithful to that then he could do what he liked with it.

Maybe he can, but it would have been helpful to be able to actually hear what Iago and Othello were saying — Iago seemed to have a problem with his teeth and Othello, the mighty military general of Venice, spoke like he was happier with South London patois and when consumed by jealous passion could be barely understood.

Generals command armies, are diplomats and often statesmen — those who rise through the ranks modify their voices to lose any accent; playing him like a street kid doesn’t work for this reviewer.

Despite these moans the play shoots through at a pace and is powerful enough to get away with a bald striplight-illuminated set.

Opening with what appeared to be a Muslim marriage rite was interesting and not something out of the Bard’s playbook, but we imagine that if he were here today he may well have included it.

And in the end Othello is such a masterful piece of writing and contrivance that you can even forgive those who trespass ... maybe not against it, but certainly on it.