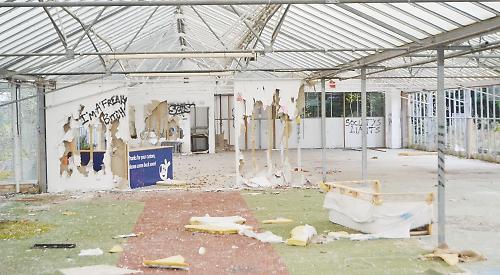 PLANS to redevelop a derelict garden centre near Shiplake for homes and offices have been recommended for approval.

Aida Dellal, who owns the old Wyevale site off the A4155 through her company Dairy Lane, wants to build up to 40 new houses plus commercial units and possibly a community centre on the 4.5-acre plot.

The application was set to be decided at a meeting of South Oxfordshire District Council’s planning committee on Wednesday evening and was supported by the officers.

Although the site was earmarked for purely commercial use in the joint Henley and Harpsden neighbourhood plan, the officers accept Mrs Dellal’s argument that it is no longer viable for these purposes and the homes are needed to make it profitable.

Her plans were opposed by Harpsden and Shiplake parish councils, the Campaign to Protect Rural England, the Henley Society and the Chiltern Society as well as 15 residents.

Opponents say the development would place undue pressure on surrounding infrastructure, particularly roads and schools in Henley, while eroding the green boundary between Henley and Shiplake.

But Oxfordshire County Council, the highways and education authority, says the traffic increase wouldn’t be big enough to justify objecting and there is enough space in the area’s schools for any new children.

Furthermore, an independent consultant who reviewed Mrs Dellal’s business case for the district council concluded that a commercial development only would not be viable.

In a report to the planning committee, officer Emma Bowerman said the lack of an alternative prospect for the site justified allowing the scheme despite the conflict with both the neighbourhood plan and the district council’s own local plan.

She said the site, which has no protective designation, had become derelict and was previously developed so the scheme would not represent further urbanisation of the area.

Ms Bowerman said: “A high-quality and well-designed housing-led scheme would be an acceptable alternative to the existing site use and its allocated use for business development.

“Subject to improvements to public transport, future residents would not be wholly reliant on travel by private car and would have a choice of travel modes to access employment, amenities and leisure activities.

“The development would utilise a currently vacant brownfield site… it would add some pressure to local roads but the cumulative impact would not be severe.”

At least 16 of the proposed units would be “affordable”, meeting the district’s quota of 40 per cent, and 12 of these would be rented out at rates fixed below market value while four would be sold under a shared ownership scheme.

There would also be 76 parking spaces, a 1,440 sq m “village green” in the centre of the development and a large building in the south-eastern corner with 500 sq m of office space plus car and bike parking.

If the scheme goes ahead, Mrs Dellal, who lives at Fawley Court, off Marlow Road, Henley, will be asked to pay about £40,000 to improve public transport services and a further £10,410 towards infrastructure like bus stops and shelters.

The site is next door to Thames Farm, whose owner Claire Engbers has been given outline planning permission for 95 homes after winning an appeal in March.