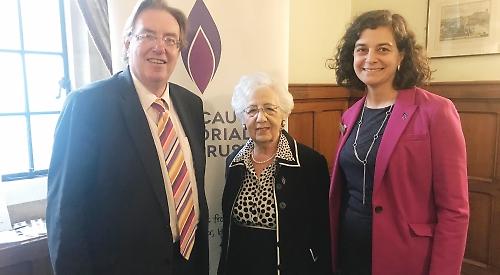 He heard a talk by Helen Aronson, who survived the Lódz ghetto in Poland as a teenager.

Holocaust Memorial Day is held on January 27 each year to remember the six million Jews murdered and the millions of people killed under Nazi persecution and in subsequent genocides in Cambodia, Rwanda, Bosnia and Darfur.

The date marks the anniversary of the liberation of Auschwitz-Birkenau, the largest Nazi death camp. The theme for 2019 is “Torn from home”.

Mr Howell said: “The experiences of survivors such as Helen remind us about the importance of marking Holocaust Memorial Day, when we remember the millions of people who were affected by the Holocaust and subsequent genocides.”

He is pictured with Mrs Aronson and Olivia Marks-Woldman, chief executive of the Holocaust Memorial Day Trust.