Common brings back memories of tobogganing and summer picnics 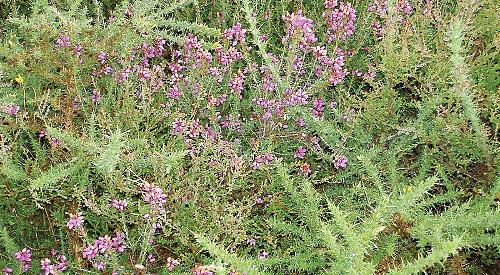 THE other morning I found a dead wood pigeon on the lawn under one of my trees. It was unmolested so I can only surmise that it had just died in the night and fallen from its perch.

I made the discovery just minutes before jumping on a bus to Peppard Common.

As I prepare to leave, I look skywards as a red kite and a buzzard have a dog-fight over the local territory rights. It looks like the Battle of Britain all over again.

After leaving the bus at the terminus at Kingwood by the Unicorn pub, I head along Colliers Lane.

To the right and up some steps a narrow path leads me to the west section of the common. Along here is a small cottage once inhabited by an old family friend, Sally Biggs. She once unearthed a small Roman figurine in her garden, a cast for the finished metallic result. I can only surmise that there was a workshop here linked to a villa.

Notwithstanding all the archaeology, this has always been a special place for me with memories of summer picnics and tobogganing in the snow in winters past.

This 46 acres of common land is, thankfully, protected and is host to a large range of flora and fauna.

There is a herd of roe deer and if you are lucky you may spot the odd common lizard.

Trees have barely grown larger since I was a lad but the blackthorn is spreading.

There are plenty of plants growing at the western end that are uncommon elsewhere in our county, such as heath bedstraw (Gallium mollugo), with its odd and frankly strange scent, bell heather (Erica cinerea) and dwarf gorse (Ulex minor) as the soil here is acidic.

There is also plenty of the edible sheep’s sorrel (Rumex acetosella).

The land takes a sharp dip northeastwards past some small but probably old oaks where in summer at the valley bottom common knapweed (Centauria nigra) is abundant and butterfles abound.

I have encountered many little froglets on this slope in early summer and wonder where they come from. The grassland can be very damp but my guess is that there must be a garden pond nearby. Nonetheless, what a journey they have made to get here!

There is a couple of old chalk pits on the common, one visible on the left as the road from Sonning Common heads north, another off Colliers Lane.

There is also a gravel pit near the Red Lion pub which I approach via a narrow path up through some woodland and on to grassland.

This is another large open space and quite handsome. An old track that leaves Henley via Pack and Prime Lane passes through here on its way to Goring.

I return to the Unicorn for lunch. If you take a window seat here you can see the bus arrive at the terminus knowing that you have a good five minutes before boarding to return.

Arriving home, I find the dead bird has gone. It was probably taken by a fox but perhaps it was that kite or buzzard.