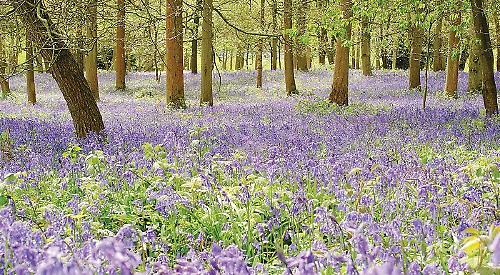 VISITORS can no longer see the bluebells at Greys Court without paying.

The National Trust, which owns the historic house near Greys Green, has erected fences at Spinney Wood, where the bulbs grow, after restoring and re-routing the path through it.

It says this is to manage visitors and prevent cattle getting in and damaging the plants.

But some visitors are unhappy that it means they now have to pay to see the bluebells in flower in spring.

People used to be able to use the lower car park and enter the wood from there but now that is impossible due to the fencing.

Ruth Gibson, of Vicarage Road, Henley, said: “People could walk in through the bluebell wood and walk to Greys Court without showing a membership card.

“The trust said they had to close that off because people were walking through into the grounds.

“Now if you want to go into the bluebell wood you have got to go in via the main entrance and show your ticket.”

The trust says the wood is still visible from a public footpath that runs along the bottom of it.

But Mrs Gibson, who is a member of the trust, said visitors now had to show their memberships at the entrance, go to the back of the lawn by the house and then across a field to where a new entrance gate to the wood has been created.

This was a detour of about half a mile from the lower car park and the old entrance to the wood and too far for some elderly people to walk.

Mrs Gibson, who is also a member of the Henley Archaeological and Historical Group, said: “It’s no longer accessible for people unless they are good walkers. A lot of our elderly members can’t do it and they are really quite sad about it.

“It is us grannies, too, who take and pay for their grandchildren’s fun day out at Greys. If we can’t get around and have the occasional sitdown, we will have to go elsewhere, which would be a pity as Greys is a very special place to so many of us. It’s very much a local jewel. I think they are a victim of their own success. They have many more visitors than they used to because they have become very child- friendly.”

Rob Hayes, general manager of Greys Court, said the path which leads through the bluebell woods had been restored to its original starting point in the garden last year with the approval of the Brunner family, who owned the house until 1969 when they donated it to the trust.

He explained: “The Gentle Walk has always been a permissive path through the grounds rather than a definitive Right of Way. We do understand that some people were frustrated at not being able to follow the route that they were used to.”

Mr Hayes said the rerouting was also done stop cattle getting into Spinney Wood and to manage access by the public.

He said: “Stock fencing has been installed around Spinney Wood as cattle had damaged the gate and entered the bluebell wood on several occasions.

“When bluebells are crushed, the plants die back as the leaves cannot photosynthesise and the bluebells can take several years to recover. Stock fencing consistent with the rest of the fencing surrounding Spinney Wood was used to secure the boundary — cattle require barbed wire or electrified fencing to deter them from leaning on a fence and damaging or destroying it.

“The bluebells at Greys Court have suffered over the past few years due to cattle and also increased human footfall and there is now a designated visitor route through the Spinney Wood to help conserve them, so that people can continue to enjoy the bluebells in years to come.

“The spinney fencing is part of a process to restore the traditional boundary of Greys Court. In order to balance our responsibilities effectively, we do need to know how many visitors are accessing the estate at Greys Court and how many people are on site at any one time. The only way to track the number is to ask them to enter via the visitor reception.

“This also helps us to keep the site secure when the property is closed and gives us the opportunity to let people know about any changes or works at Greys Court that may affect their visit.”