Jurassic lark’s suitable for all the ages 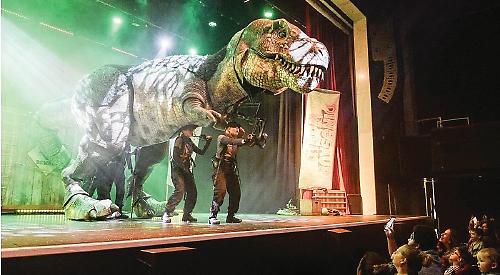 There was even some background simmering tension — partly as to what gigantic creature would stomp on to the stage next, partly around whether the security arrangements were adequate, but also with a wobbling dinosaur egg that threatened to hatch at any moment.

My two sons, aged 10 and seven, found it both entertaining and educational, while the mild terror was pitched just so, with the audience rapt rather than scared, and comedy moments for parents and guardians to enjoy.

With enthusiastic and knowledgeable Miranda (Elizabeth Mary Williams) at the helm, inviting kids on to the stage and filling us in on the facts and the dinosaur “characters”, my older son was shouting out the answers and my younger son was quite taken with the giant lizards.

Puppet-maker Max Humphries has achieved some curious creations, with realistic and believable movements, teased out by some expert puppeteers working in sync.

My kids found it delightful, both saying they loved it and they were fully absorbed. From the odd dino snort to the stomping of feet, this show was dino-mite.