LEST WE FORGET: All the local Remembrance Sunday services and parades 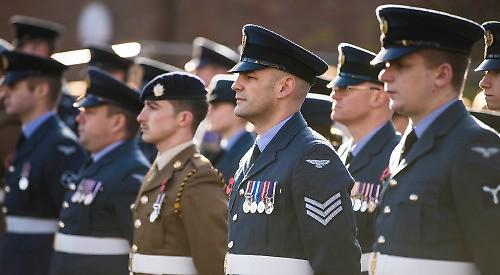 SERVICES of remembrance will be held in Henley and the surrounding villages on Sunday.

These will coincide with Armistice Day, which marks the official end of the First World War on November 11, 1918.

In Henley there will be the usual service outside the town hall at 11am preceded by a parade with the air, sea and army cadets as well as scouts, guides and brownies who will gather at 10.40am.

The service will be led by Rev Jeremy Tayler, the rector of Henley with Remenham.

There will be a fly-past by a Sopwith triplane, a Fokker triplane and an SE5 biplane and another by two helicopters from RAF Benson at 10.55am.

At 7pm, a beacon in Makins recreation ground, off Greys Road, will be lit. All are welcome to watch.

In Benson, current and former servicemen and women will join residents of the village and neighbouring Ewelme and Dorchester in a parade that will assemble at 10.30am in High Street.

At 10.43am the parade will set off for the war memorial at the junction of Oxford Road and Church Road with the marchers in order of RAF personnel, members of the Royal British Legion and then scouts, cubs, guides and brownies.

The service of remembrance will begin at 10.52am. The names of all servicemen from the parish who died in the two world wars as well as those who have died while serving at RAF Benson since 1945 will be read out.

At 10.58am the parade will be brought to attention for the Exhortation and Last Post, which will be sounded by a bugler of the Roke and Benson band, and the banners will be lowered.

A two-minute silence will be observed from 11am followed by Reveille being sounded, the banners being raised and the Kohima Epitaph being read.

At 11.04am there will be a fly-past organised by RAF Benson followed by the laying of wreaths, including those on behalf of Benson Parish Council, Benson Women’s Institute and Benson Youth Club.

Following a blessing, the parade will come to attention and march to St Helen’s Church for the service to be conducted by Rev Patrick Gilday.

The service will be followed by refreshments in the Canon’s Room from noon.

A joint service for Bix and Pishill will be held at St James’s Church, conducted by Rev Chris Stott. Relatives of those who took part in any conflict are welcome to attend. The congregation is asked to assemble outside the church door to watch a fly-past at 10.45am, featuring two helicopters from RAF Benson.

A Battle’s Over event will be held at Bix village hall. It has been organised by the Bix branch of the Royal British Legion with donations from Bix, Stonor and Swyncombe parishes.

This is part of a nationwide community event starting at 6.45pm with a welcome by Brig Andrew Myrtle, president of the Bix branch, followed by a poem read by the Hon William Stonor.

At 6.55pm The Last Post will be sounded and the standard dipped followed at 7pm by a beacon being lit by James Hunt, his son Charlie and Lee Vockins, who are relatives of those who suffered in the war. Bix and Pishill church bells will be rung simultaneously with bells in 1,000 churches and cathedrals across the UK. Mulled wine and nibbles will be available in the village hall afterwards.

In Caversham, St Peter’s Church in The Warren and St John’s Church in Gosbrook Road will hold services beginning at 9.30am.

These will end in time for worshippers to join the ceremony at the Caversham war memorial in Christchurch Meadows, which begins at 10.45am. In Checkendon there will be a remembrance service at 10.55am at St Peter’s and St Paul’s Church at 10.55am, conducted by Rev Kevin Davies.

The service at All Saints’ Church in Dunsden will begin at 9.15am and will be followed by a commemoration at the war memorial on Dunsden Green at 10.30am.

In Goring, a lone piper will play a lament by the war memorial in St Thomas Church in Manor Road at 6am. A service will be held from 10.50am to 11.45 am.

At 12.30pm, the church bells will be rung, timed to coincide with the march past the Cenotaph in London of 10,000 people.

In Harpsden, a service will be held at St Margaret’s Church from 10am to 11am.

At St Mary’s Church in Ipsden there will be an act of remembrance at 11am. In Kidmore End, a remembrance service will take place at the war memorial in Wood Lane. Spectators are asked to assemble at 10.50am.

Afterwards there will be a service in St John’s Church at which the Royal British Legion colours, together with those of scouts, cubs and beavers, will be received into the sanctuary. All welcome.

In Nettlebed, members of the village branch of the Royal British Legion will parade from the bus shelter to St Bartholomew’s Church at 10.30am. All welcome.

Once the parade reaches the church lychgate, the village’s war memorial, there will a short ceremony to remember those who gave their lives in the war.

A bugler will sound the Last Post and a two-minute silence will be observed and wreaths laid in their memory. Afterwards everyone will be invited to go into the church for the remainder of the traditional service.

At 3.30pm, a concert of music and poetry will be held in association with the Pangbourne Silver Band. Tickets are not required but seating will be allocated on a first-come, first-served basis. Donations to the Poppy Appeal are encouraged.

At 6.50pm, a beacon will be lit in the village to coincide with the lighting of more than 1,000 beacons across the country. At 7.05pm, the church bells will be rung.

In Shiplake there will a service at St Peter and St Paul’s Church at 10.50am, followed by a remembrance service at the war memorial in Lower Shiplake at noon. Those wishing to attend should arrive at about 11.45am.

Parents and families of pupils at Shiplake College as well as visitors are welcome to attend the school’s remembrance service inside the Great Hall at 10.45am. The speaker will be headmaster Gregg Davies.

A parade will congregate at Pearson Hall in Sonning at 10am.

This will be led by the Salvation Army band and supported by Reading Blue Coat School in the village as well as scouts and guides. A service will be held afterwards at St Andrew’s Church, conducted by the Rev Jamie Taylor.

In Wargrave, there will be a parade of uniformed organisations led by the St Sebastian’s Band to arrive at St Mary’s Church at about 9.45am for the 10am remembrance service.

The speaker will be the Rev Hugh Barne, curate of St Mary’s.

At 10.45am, the congregation will move to Mill Green to mark the two-minute silence at 11am. All are welcome to attend.

In Watlington, there will be a parade from the town hall to the war memorial in High Street, where a short service will be held, a two-minute silence observed and wreaths laid. All are welcome to attend.

Residents of Whitchurch and Whitchurch Hill can attend a church service at St John’s Church at 9.30am followed by an act of remembrance at the war memorial in High Street, Whitchurch.

In Woodcote, villagers will observe an act of remembrance at the war memorial from 10.30am, followed by a remembrance service at St Leonard’s Church.

There will be a requiem mass at the Oratory School from 9.30am before its Combined Cadet Force and selected musicians go to the village war memorial to join in with the ceremony.

• The Aliquando Chamber Choir is staging a concert at St Mary’s Church in Henley in aid of the Poppy Appeal at 7pm tomorrow (Saturday) and not last Saturday, as was incorrectly reported last week. For tickets (£25), call (01491) 578 238. We apologise for the error.