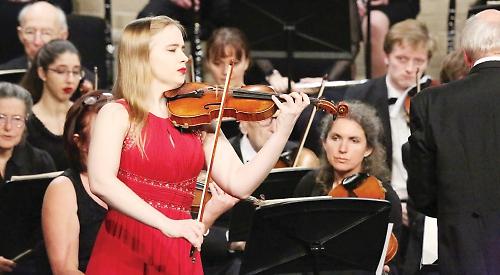 IT is amazing that a village the size of Crowthorne can boast of being home to a full symphony orchestra and be prepared to put on challenging repertoire; but it does so — with panache.

For this concert, given at Wellington College to a packed audience, the orchestra had engaged the considerable talents of the young Russian violinist Elizaveta Tyun for the first half of the programme to perform that old Russian warhorse, Tchaikovsky’s Violin Concerto.

Miss Tyun immediately established that she has a flawless technique and plays on an instrument that is capable of carrying its clear rich sound into the farthest reaches of the concert hall.

More than that — she imbued this most romantic of all violin concertos with an innate understanding of how to bring out all the passion that lies within the music without distorting its structure. That is a rare talent.

There was none of the skating and tumbling of notes in a scramble to get them all in at top speed that is commonly endured in so many lesser performances of Tchaikovsky’s challenging work. It is a mark of her true artistry that Miss Tyun maintained the full impetus of the music from start to finish with every note being audible.

Russians are famous for their passion and Miss Tyun is no exception. In the finale, marked Allegro vivacissimo, the soloist, with a smile on her lips, kept the orchestra on its toes as they tossed fiery flurries of notes at each other in perfect synchrony. Credit must be given to the orchestra’s music director, Robert Roscoe, who oversaw fair play in this exuberant firework display.

The exciting performance was greeted by the audience with well-deserved rapturous applause.

The second half of the programme was devoted to a single work, Rimsky Korsakov’s Scheherazade. This four-movement symphonic suite places considerable demands on the soloists in each department of the orchestra as they bring to life in musical terms the wondrous tales that Scheherazade tells to her master in order to defer her own execution.

The orchestra gave a robust, well balanced account with many individual acts of heroism to boast of, not least that of the maestro on the podium who dealt with the frequent changes in tempo and mood with consummate skill and authority. The brass and percussion sections excelled themselves with solid, reliable sound that provided invariably well controlled solos and discreet support when needed. The woodwind and string solos in this work are particularly demanding. A little more personal practice might have helped with their occasional technical and intonation problems.

This was a most rewarding concert but it is the performance of the concerto that will live longest in people’s minds as being very special!