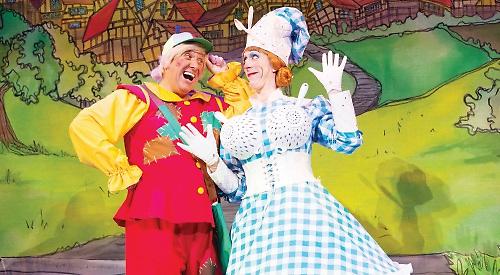 WITH 80 years of pantos at the Theatre Royal Windsor to celebrate, this year’s effort features a suitably star-studded cast.

Among the familiar faces are radio and TV presenter – and Henley resident – Mike Read, who played the parts of Alderman Fitzwarren and Captain Fisheye. These contrasting characters - a loving father and a ship’s captain - demonstrated his exceptional acting skills.

With last-minute casting changes due to Anne Hergerty’s role in the current series of I’m a Celebrity ... Get Me Out of Here!, Anita Harris played the Rat Queen. She was definitely one of the strongest performers of the show, engaging with the children who booed and hissed whenever she appeared on stage.

In contrast to the Rat Queen, Marti Webb covered the role of Fairy Bowbells, who delivered the all-important message that good will always beat evil and to never lose sight of your dreams.

The two characters who especially stood out were Idle Jack and Sarah the Cook, played by Kevin Cruise and Steven Blakeley respectively. The pair were absolutely hilarious throughout the whole show.

One of their best scenes, which banked the most laughter, was the swimming scene after the shipwreck. Their continuous modern-day jokes and arguments with one another generated the most comedy. No spoilers, but you might want to pack an umbrella for when they get the water pistols out.

The creative team completely outdid themselves with the music, dancing and stage setting. The musicians were incredible, with the characters’ voices raising the roof.

The incorporation of songs from The Greatest Showman were the most popular among the audience. The props as well as the incredibly flamboyant costumes all contributed to a fabulous show full of energy and spirit.