Tomorrow belongs to this lot! 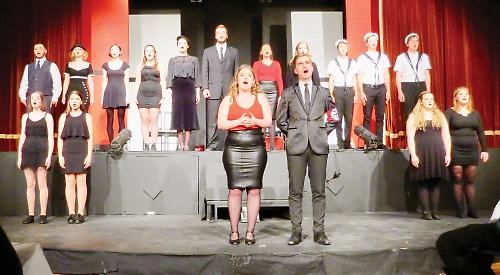 FOURTEEN years ago, I stood on the Rotherfield Hall stage at The Henley College, performing in Cabaret.

On Thursday, I returned to review it and was filled with sentimentality.

It’s a tough show, full of darkness and quite adult themes for such a young cast, but the production team, led by Neil McCurley, tackled it well.

The Rotherfield Hall was set out cabaret-style with the audience seated at small tables throughout the hall — though I would have liked them positioned closer together to build that intimate, packed crowd feel.

The show opened with Sam Burton-Harris and Oscar Hogg-Gomez, taking on the role of the MC as a double act. Initially I was not convinced by this idea, but the two cheeky chaps won me over quickly.

They had a huge role to carry the narrative of the show and embraced the quirky, camp, preposterous nature of the part.

My personal favorite moment was “Two Ladies” reworked to be the MCs as the ladies — very clever, delightfully naughty and suggestive.

The dancers were a real highlight of the show. Tara Choudrie has done an incredible job with the choreography and every dancer was well rehearsed and committed to every movement confidently.

My personal star of the show has to go to Ellen Webb, though. She held the role of Fraulein Schneider, the owner of the boarding house, with real class.

Her vocals were impeccable and she played the emotions of the role very naturally but with impressive intensity.

She also played well against Michael Stubbs as Herr Schulz, the Jewish fruit seller. Their “pineapple” duet was fun yet poignant.

Michael brought some light comedy to the role but didn’t overplay it, although at times I felt the nerves.

Cabaret is only complete with a quirky whirlwind of a Sally Bowles, and in this production Georgina Volkers bravely took on the role.

Georgina definitely has talent, lots of it. However, in this instance, I didn’t feel she was cast right in the role. Her classic beauty, light vocals and niceness just didn’t work for me as a Sally. I never saw the destructive nature needed but I would love to see her as a Sarah Brown or Liesl or Irene Molloy.

Joe Gater performed well as Cliff Bradshaw, was very natural in his performance and brought a strong confidence without losing the awkward nature of the character. His acting was strong but his vocals lacked a little technique.

Joseph Perry performed well as Ernst Ludwig and Kirsi Burch sang strongly as Fraulein Kost, although both could have gone a bit stronger in the intimidating/
sexual natures of their respective roles.

The cast as a whole was full of talent and the show was well staged and rehearsed. My companion, who had never seen Cabaret before, was impressed but did miss some of the darker, more adult themes in the piece. Perhaps this is simply an age thing — life experience will always make you a stronger performer but the production didn’t shy away from any of the themes and I was very impressed by the maturity the cast brought.

The show did lack pace — the band could definitely have kicked on a lot more in some of the numbers — but the show was full of detail and interest: the cast and crew should be proud.

I must also mention the front of house team, who were welcoming and helpful, which always makes a theatre experience better — so thank you to Mia Jackson and Becky Houghton for leading the team.