Final chance to nominate a woman of achievement 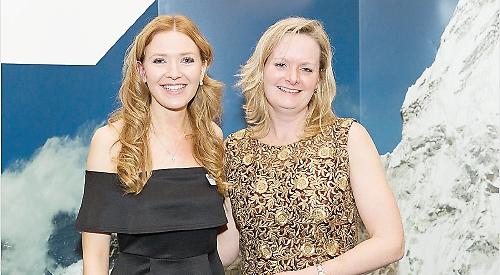 WINNERS of the Sue Ryder Women of Achievement Awards are urging people to make nominations for next year’s awards.

Anybody who knows an inspirational woman living or working in the Henley area is encouraged to put them forward in one of seven categories, including business, community, sport, innovation and public service.

New for 2019 is the mentor of the year award, which celebrates the achievements of women who have helped to shape the lives of others with guidance and encouragement.

The seventh award is the Robyn Jones courage award, which is named after the award-winning founder of commercial catering firm CH&Co, of Dunsden, who died in 2015.

Her husband Tim, who now runs the company, will present this at the 12th annual awards ceremony to be held at the Royal Berkshire Conference Centre at the Madejski Stadium in Reading on Friday, March 15.

Beccy Harley, catering manager at the Sue Ryder hospice in Nettlebed, won the award for staff and volunteers this year before also collecting the Robyn Jones Award.

She said: “I am still extremely honoured to have received such an important award. I never thought for one minute it would be me.

“I encourage people to think about a woman in their life who needs celebrating. It’s a special way to thank someone and it means a lot even being told you’ve been nominated — I often think about who put me forward.”

Ms Harley, who has worked for Sue Ryder for 18 years, gives up Christmas Day each year to cook for patients.

Former paramedic Suzanne Stickley, who founded Henley training company First Aid Matters in 2012, won the services category this year. She said: “Apart from the accolade that comes with being nominated and eventually winning, it makes you feel like you’re doing something good and worthwhile.

“It’s especially good for small businesses like mine as you want to know you’re putting something back into the community and making a positive difference.

“People should support the awards by nominating people as it’s so worthwhile and there’s always a lovely atmosphere on the night.

“Sue Ryder is a wonderful organisation and just by being nominated you feel proud to be associated with it.”

Double rowing world champion Sarah Winckless, who won this year’s sport category, said: “Sue Ryder is such a great charity that does amazing work so I was proud to have them recognise what I do and acknowledge that it has value.

“It was a real honour to receive the award and the evening itself was very enjoyable.

“We don’t achieve these things in order to be noticed but it is inspiring to meet other women who have done incredible things and often in the face of adversity.

“You could see each winner’s face light up and the nominees were equally proud to be taking part so I’d love to think that other women will have that same opportunity at the next awards.”

She said: “It’s so nice to be recognised and very encouraging when you know you’ve been nominated by your peers.

“There are many women in Henley who are just quietly making a difference and it is so helpful for them to know that their efforts are valued.”

The awards are sponsored by Invesco as well as CH&Co, digital marketing agency Grandesco and Higgs Group, publishers of the Henley Standard.

Nominations are open until January. To make a nomination, visit www.sueryder.org/swoa