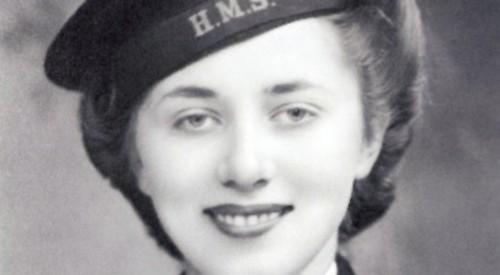 In 1943 she joined the WRNS in a fit of pique because her application to join the WAAF as an MT driver had been turned down. This was probably due to the fact she was only 4ft 10in and would not have been able to drive big army trucks.

Having never been out of Scotland, she was sent down to Bletchley Park to work on the Bombe, the famous Enigma decoding machine.

It was only once she was there that they realised the one-ton machine was so large that Jean couldn’t reach the top row of rotors, so they had to build a small platform for her so she could operate it.

She suspected the reason she was chosen for this work was that on her application form she wrote about her love of cryptic crosswords and lateral thinking, which were the sort of skills they sought in people they felt would be ideal code breakers as well as mathematicians, linguists and chess players.

While still only 19, Jean was posted to Sri Lanka after being trained on Japanese codes and ciphers, her job being to decipher the Japanese meteorological reports and teleprint the results to various fleet reconnaissance units in the Pacific.

This was where she met Clive, a Royal Navy seafire pilot, and they were subsequently married in Colombo.

Having had to sign the Official Secrets Act, Jean never talked about what she did in the war, even to her parents, until the mid-Seventies when the first of the books came out about the vital role of Bletchley Park during the Second World War.

She started to attend the veterans’ reunions and was asked if she would become one of the volunteer guides to show the ever-increasing numbers of visitors around the park.

Over many years, up until her late Eighties, Jean guided hundreds of tours of up to 35 people at a time. She always spent a little extra time on each tour at the rebuild of the Bombe, where visitors were able to get first-hand knowledge and have the chance to ask questions of someone who actually operated the machine during the war.

In October 2009, the then Foreign Secretary David Miliband presented Jean and a number of other veterans with a special medal from GCHQ in recognition of their wartime service.

In July 2011, Jean had the honour of demonstrating the Bombe to the Queen and Duke of Edinburgh at a special ceremony to unveil the new memorial to the wartime codebreakers.

In recent years Google has maintained a close relationship with Bletchley Park because of Alan Turing’s work on algorithms and early computer science.

It raised the funds to buy the Turing Papers when they came up for sale, allowing them to remain at their rightful home at Bletchley.

As part of its arts and culture series, Google and GCHQ interviewed Jean at Bletchley Park and a short film describing her time there can be found on YouTube (see https://artsandculture.google.com/
usergallery/KgJiGzFM8t1iLA)

Typing “Jean Valentine — Bombe operator” in a web browser also reveals a number of interviews and a film of Jean demonstrating the machine.

On the 60th anniversary of
D-Day in 2004, the image of Jean as a young Wren was used on a postage stamp issued by the St Vincent & Grenadines islands.

She also took part in the BBC’s Antiques Roadshow with Fiona Bruce in 2010 and in 2012 was in the edition of Celebrity MasterChef from Bletchley where the three finalists had to prepare a dinner to honour the codebreakers who worked there during the war.

She also featured in the Alan Turing episode of Absolute Genius of Dick and Dom on CBBC.

Jean did many radio interviews over the years and spoke at meetings of Women’s Institutes, the Association of Wrens and Royal British Legion branches.

She worked closely with the author Sinclair McKay on background information for his books, including The Secret Life of Bletchley Park and joined him on stage for a question and answer session at the Henley Literary Festival.

Jean lived in Marlow for many years but her later years were spent in Henley, where she was an active member of Phyllis Court Club’s Scrabble group and she attended many Royal British Legion events in the town.