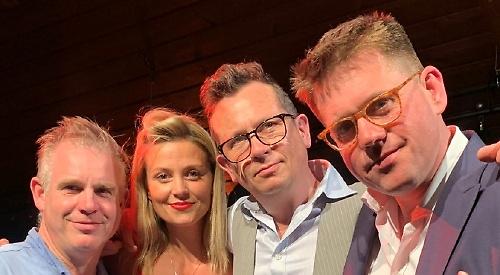 JAMES PEARSON, the artistic director of Ronnie Scott’s famous jazz club and the leader of its house band, thrilled the full-house audience at Purdy’s Pop-Up Jazz Club as he met the challenge of presenting “100 Years of Jazz Piano” in just short of two-hours.

A gifted and colourful raconteur as well as a brilliant pianist, he brought the story of jazz piano alive as he traced its evolution from the notorious “sporting houses” of New Orleans’ Storyville District at the turn of the 19th century to the eminent respectability of the concert hall stage.

A dazzling solo performance of Scott Joplin’s ragtime classic “Maple Leaf Rag” set the evening rolling. As Sam Burgess on bass and drummer Matt Skelton took their places on stage, the tune seamlessly morphed into “Sweet Georgia Brown” to perfectly demonstrate the difference between the jaunty, two-beat-played-as-written syncopation of ragtime and the open, improvised swing of jazz.

“Fingerbuster” introduced us to Ferdinand “Jelly Roll” Morton, the self-proclaimed inventor of jazz from New Orleans, who laid down the gauntlet to his many New York rivals with this veritable magnum opus.

As Pearson explained, the left-hand of these “stride” pianists generated so much energy that they played as “one-man orchestras” without the need for a rhythm section.

Stride influenced a generation of pianists, including bandleaders Count Basie and Duke Ellington.

Band scores, Pearson revealed in an amusing aside, often conclude with the letters CBE — nothing to do with Her Majesty the Queen’s honours list, but simply an arranger’s shorthand instruction for a “Count Basie Ending”.

Ellington, on the other hand, liked to heighten the drama of his arrangements with flamboyant punctuations on the keyboard, which Pearson demonstrated to grand effect by sitting on his!

Boogie-woogie captured the popular imagination in the late 1930s — everything was suddenly given a boogie-woogie treatment, including many well-known out-of-copyright classical pieces.

In complete contrast to the raw, train-like momentum of boogie-woogie, Teddy Wilson emerged with an elegance of style well suited to popular standards of the 1930s like “Lullaby of the Leaves”.

Bud Powell took things a stage further a decade later with his flights of lightning-fast improvisations on numbers such as the bebop anthem “Ornithology”.

Bud was given to using his left elbow to strike the keyboard — a feat which Pearson demonstrated with such speed and dexterity that I scarcely noticed.

The 1940s also saw the appearance of two idiosyncratic giants of the jazz piano — Thelonious Monk and Erroll Garner.

“Blue Monk” captured the spirit of Monk to perfection; spiky, pulsating and with weird sounds that somehow fitted together, even if your ear told you that they shouldn’t have done.

The diminutive Erroll Garner used telephone directories to raise him up on the piano stool to create music that couldn’t help but bring a smile to your face — in this case “Misty”, his most famous composition.

Garner was also responsible for introducing the art of “gruntology” to jazz piano — grunting at key moments in a performance.

To demonstrate, Pearson played a short piece in Garneresque style; first with grunt and then without. With grunt was definitely more entertaining.

Contemporary pianists have since taken gruntology a stage further with what Pearson calls “the silent grunt”, which he expressed via a variety of hilarious facial contortions.

“Lullaby of the Leaves” and “It’s a Raggy Waltz” saluted the distinctive styles of British born George Shearing and Dave Brubeck, who each contributed much to raise the popular profile of jazz piano in the 1950s and beyond.

Conversely, the classically trained Bill Evans was known as a pianist’s, pianist — a player of great sensitivity, as the gorgeous interpretation of “Waltz for Debbie” fused with an off-the-floor-request for “What Are You Doing the Rest of Your Life?” bore witness.

If the rhythm section of Sam Burgess and Matt Skelton had been held under wraps for parts of the evening they were able to cut loose on the final number, “Place St Henri” — a tour de force dedicated to Oscar Peterson, the musician Pearson considers to be the most complete pianist in jazz history.

This was a breathtaking climax to a wonderfully entertaining and informative evening — oh that music lessons could have been this much fun when I was at school!

But there was still more to come, as Purdy joined the trio to round things off with four numbers: “Too Darned Hot” (an apt choice), the wistful “Real Thing” (soon to be released by Purdy as a single), “Like Someone in Love” and a rousing “It Don't Mean a Thing (If It Ain't Got That Swing).”

As ever, thanks are due to Rebecca Poole (aka Purdy) and her team of helpers for their warm hospitality, the quality of the sound and lighting, and for bringing such world-class jazz to Henley.