Audience participation so great they even ask you to join at the end! 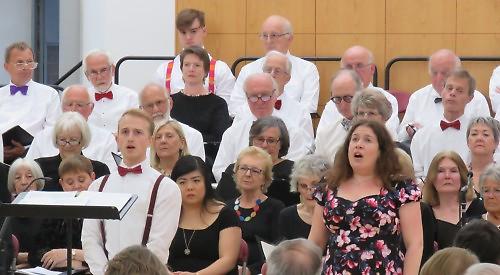 SIMPLY titled “Spirituals”, this most unusual choral concert of a piano solo and 20 much-loved pieces included Five Spirituals (from A Child of Our Time) by Michael Tippet that were woven tastefully into the fast moving and entertaining programme.

So many amateur choirs these days have difficulty recruiting male voices, tenors in particular.

But the Pangbourne Choral Society is unusual for having its full complement of males, giving a very even balance between the voices and bringing forth a robust, full sound that is a real joy to encounter.

The choir was augmented for the occasion by a semi-chorus drawn from talent within the community — for whom Ellie Calver, the society’s music director, had provided some well-executed descant material.

Ellie not only rehearsed the choir but provided her own arrangements for much of the music on this occasion, conducted the event, sang several solos and contributed duets shared with the young bass-baritone Jonathan Stirling.

Ellie has a powerful and flexible mezzo-soprano voice and performs as a true soloist with convincing passion and aplomb. It appears that she would be just as comfortable and convincing singing soul in a dungeon as Verdi’s Requiem at the Royal Albert Hall.

Jonathan Stirland also provided several solos, delivered with charm and warmth. In particular his rounded, resonant rendering of Old Man River had astonishing depth, carrying power and clarity for someone so young. This is a talent that is going places.

Towards the end of the concert Ellie undertook to teach the audience to sing.

While she had the ground floor audience willingly pumping out a spirited version of When the Saints Go Marching In, the gallery folk were simultaneously bellowing Swing Low, Sweet Chariot and the choir were contributing something completely different to the mix.

Meanwhile, Ellie ran around the auditorium, upstairs and downstairs like a whirling dervish extolling her troops to even greater efforts. The audience were on their feet enjoying every moment of it.

At the end of it all, her message to the audience was simple: “If you enjoyed doing that, why don’t you join the choir?” Tempting! Now if you happen to be free on Tuesday evenings…

Ellie Calver’s boundless enthusiasm and energy is most apparent when she is conducting.

Unlike the revered maestro Sir Adrian Boult, who took minimal body movement to a fine art to earn his knighthood, Ellie is a mass of frenetic involvement from her toes upwards, bent on mesmerising the choir — and the audience.

She confided that her approach is based simply upon putting every ounce of energy into her conducting in order to draw out a similar commitment from her troops.

It works brilliantly and is both inspiring and a wondrous spectacle to behold. Long may it continue.