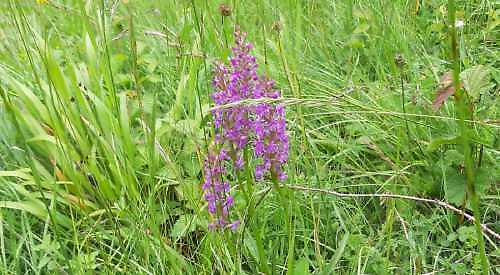 It covers almost 40 acres and at its highest point is about 190m above sea level.

I had not been before but was encouraged to visit with my friend Matt Coome after reading in the trust’s newsletter that record numbers of rare military orchids (Orchis militaris) were recorded there last summer.

To make a visit, you require a permit from the trust.

There’s an entrance by the side of an ancient lane that leads through the woodland’s northern side.

At the bottom some kissing gates reveal a magnificent panorama. A truly huge woodland rises on the other side, an army of mature, native, broadleaved trees.

To our left is a vast expanse of chalk grassland on a steep slope and it is this that we will explore. The overlying soil is very thin, dry and poor in nutrients like nitrogen and phosphate, which means that it is not dominated by large hungry plants such as stinging nettles and tall grasses that depend upon them.

The result is a myriad of smaller and beautifully coloured flowering plants and delicate grasses with their attendant range of butterflies, bees, insects and spiders that flourish here.

Many plants you would expect to find are present — milkwort, rock-rose, bird’s-foot trefoil and salad burnet to name but a few.

We carefully follow a narrow “path” skirting the high ground.

Orchids are everywhere. In fact, I have never seen so many before. There are hundreds of them — common spotted, fragrant and pyramidals are simply everywhere. We are very careful where we tread. A stately common spotted orchid (Dactylorhiza fuchsii) is the first for inspection. It is about 8in tall and an absolute beauty, the bottom lip of the flowers etched with dark purple lines and spots.

This species can survive “blind” for years if conditions don’t suit. Very popular with bees and flies, the plants seed quite easily but often spread underground to form clumps.

Slightly up to our left a wire mesh is protecting a military orchid, presumably to prevent nibbling by deer. Unfortunately for us, it is now fruiting so we’ve missed the stunning lilac and near white inflorescence by about three weeks.

The species was considered extinct in the Twenties but was then rediscovered in Buckinghamshire in the Forties and in Suffolk in the Fifties. It is a very rare plant indeed.

The spikes of fragrant orchid (Gymnadenia conopsea) are slim, densely flowered and mainly bright pink, with some an intense darker, purple shade and some nearly white.

David Lang describes the scent as being “like carnations” and he’s not far off. They are quite beautiful too. Frequented by moths, butterflies and bees, they readily set seed and are widespread throughout the British Isles but only locally common.

The pyramidal orchid (Anacamptis pyramidalis) is just coming into flower. Normally mid-pink, these are ruby-red.

Like other orchids, the plants are dependent on a symbiotic relationship with mycorrhizal fungi. The first leaves take five years to show and several more years will pass before flowering.

Moving along, the sheer number of orchids is astonishing. We arrive at the top end of the grassland and just as we prepare to descend, a small group of fallow deer gallops off on the other side of an electric fence that marks the reserve’s boundary.

The height of the vegetation across the fence is in stark contrast to where we stand.

We pick up another narrow path and head back near the valley floor and find a lone bee orchid (Ophrys apifera), which is unsurprising given the quality of this site.

The bee is usually monocarpic, meaning that it only flowers once and then dies. Like other orchids, it usually takes a good eight years before bearing its charming little blooms. Although it mimics a bee, it is largely a self-pollinator.

The small cushion-like hills of the yellow meadow ant (Lasius flavus) are a feature here. A blackbird sings in those enticing woods but we have to move on. Making our way back to the kissing gates, we disturb several nesting pheasants that explode into the air only feet away.

We also see maybe 20 or 30 other protected military orchids. They are doing well.

Chiltern chalk grassland herbs will flower come July, as will St John’s-wort. Chiltern and autumn gentians will follow as will nettle-leaved bellflower.

As we reach the first gate, I look down at a rough hawkbit (Leontodon hispidus). A yellow-coloured crab spider lurks on the flower in exactly the same shade. Nature can be cunning — pity the unwary insect that alights here!

Back on level ground within a smaller woodland, we decide to explore a public right of way that leads to Turville. Less than half the size of its neighbour, it is cool with sunlit glades.

Another deer leaps out of the bracken and is off. Underneath the beech trees we find the empty eggshells of a tawny owl. It starts to rain.

As we return to Matt’s car, I look back towards the now out-of-sight kissing gates with that glorious view and the enormous old wood to the west that seemed to draw me in.

I recall part of a poem by Robert Frost, Stopping by Woods on a Snowy Evening (1922). I quote:

“The woods are lovely, dark and deep,
But I have promises to keep.”

I promise to return here and very soon too.