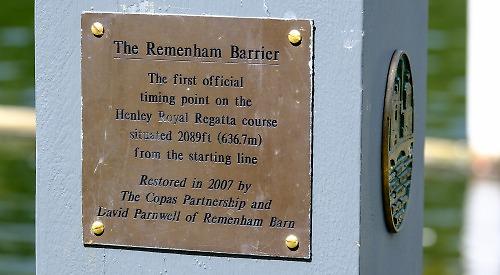 DURING last week’s Henley Royal Regatta, thousands of people must have walked past the Remenham Barrier, which is the first official timing point on the course and 2,098ft from the start line.

The Barrier is marked on the towpath on the bank with a post which has two small plaques, one from the National Waterways Festival in 1997 (pictured) and the other to mark its restoration in 2007 by the Copas Partnership and David Parnwell, of Remenham Barn.

I understand that the majority of regatta competitors who are ahead at this point go on to win the race. The origin of the name may have been a fence or gate used as a barrier in the days when horses towed boats along the river.