Woodland vandals should have more respect for our natural heritage 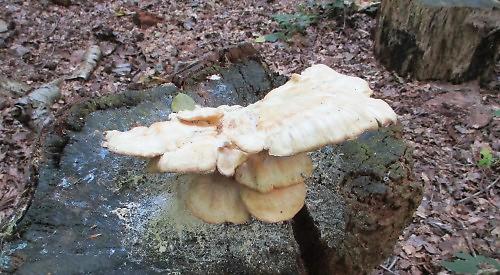 IF you go down to Lambridge Wood tonight you may be in for a big surprise. Motorcyclists unconcerned about the fact that these woods are a Site of Special Scientific Interest might be tearing about illegally and grubbing up one of Henley’s little treasures after dark.

What prompts these presumably young men to partake in this nonsensical nocturnal activity is beyond me. Perhaps it is some form of gung-ho adolescent arrogance.

I have come by invitation to meet Professor Richard Fortey, former senior palaeontologist at the Natural History Museum and former president of the Geological Society in London.

He is a prize-winning author and his latest book, The Wood For The Trees, published in 2016, describes the events that unfold each month of the year in the four acres of woodland that he owns here, Grim’s Dyke Wood.

He wants to show me what has been occurring here of late and take me on a little tour.

I walk from Henley Market Place up West Street, Hop Gardens, Crisp Road and along Lambridge Lane. My path takes me across Badgemore Park Golf Club and into these lovely woods. I meet Richard by the converted Lambridge Wood barn and he takes me for a stroll around his portion of this enchanting woodland. The trees are mainly beech with a holly understorey, which is to be expected.

In between there are some fine cherry trees, wych elm, hazel, a few ash and some stately oaks. Two fledgeling yew trees are joined by a small field maple and a young wild service tree that Richard has planted from local stock.

It is a peaceful place to be and I can understand why Richard acquired it and loves it. We come across a large fungus growing from a tree stump. It is sulphur polypore (Laetiporus sulphureus), sometimes known as chicken-of-the-woods. A bracket fungus and saprophyte, it is edible when young.

Richard certainly knows his fungi and as we venture further he gleefully pulls up a small mushroom, a species of russula, from the leaf litter. It has a brightly coloured red cap. Richard chews a little bit off the top as our eyes lock. Mulling over his newly acquired snack, he abruptly spits it out so presumably it was not that appetising!

But to return to one of the reasons for Richard’s invitation. He explains to me that despite there being clearly defined public footpaths and a bridleway running through this woodland, certain members of the public see fit to think it their personal right to wander, cycle, motorcycle and ride horses wherever they wish.

As if on cue, we encounter two men with large dogs crossing the old dyke, or ditch, a neolithic ancient monument to the side of Richard’s domain. He kindly points out to them that the legal right of way is just yards away and they apologise.

Further on and back in Grim’s Dyke Wood, Richard shows me a log that he has laid down over an unofficial path. It has been moved from across the track by persons unknown so he replaces it.

Many informative signs have been erected on posts or tacked on to tree trunks to advertise the status and accessibility of this private woodland. But no sooner do they go up than they are ripped apart and thrown to the ground. It appears to be a concerted vendetta by one or two individuals.

Richard offers me a lift back to Henley, which I gratefully accept, but before we leave we stop at the entrance to the narrow lane that runs from the A4130 Henley to Nettlebed road to the north and Broadplat to the south with a view to examining the old banks that encase this narrow thoroughfare.

Richard shows me some violet helleborine yet to flower and then we walk down the lane towards Greys.

I’m pleased that we do as we encounter quite a few green-flowered helleborine (Epipactis phyllanthes), a very local and uncommon self-pollinating orchid mostly confined to our area. Another very rare plant, the yellow bird’s-nest (Monotropa hypopitys) lives along here too.

I have always noticed, especially in relation to the helleborines, that I usually come upon them growing either on roadbanks or on old woodland boundaries and associated earthworks.

There is a problem along here though. Passing traffic has damaged the sides of the lane as it is used as a “rat-run” with Lambridge Wood to one side and National Trust-owned land to the other. The plants are sometimes crushed.

Richard drops me off in Henley and I ruminate on my way to buy a beer and enjoy a little rest.

I have certainly enjoyed my day but remain very concerned about the vandalism in Lambridge Wood and the vehicular threat to rare flora along the roadside that I can foresee only getting worse. It would be something if more respect was shown to our precious heritage.

At the moment it is difficult to see how to influence people’s behaviour and until some form of restriction is imposed on the traffic that uses our narrow lanes there will always be botanical casualties.

Bring back the horse and cart!