Why we love chickens 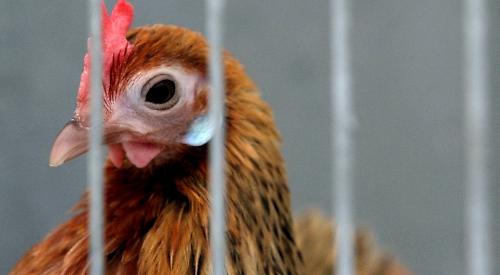 CHICKENS are domestic or farm birds with a life span of 10 to 15 years.

The male is larger and more brightly coloured than the female. This is a common feature in birds. The males show off their colourful feathers to attract the females.

A chicken has a comb on the head and two wattles under the neck. The male has a larger comb compared to the female.

The female is usually ready to lay her first eggs when she is around six months old.

The morning call you hear on the farm is actually the rooster crowing “cock-a-doodle-doo.” The female goes “cluck-cluck”.

What do chickens eat?

Chickens eat worms, insects, seeds, grains, snails, slugs, fruits, vegetables and many other foods. The gizzard, which is a part of the stomach, contains tiny stones to help grind up the food.

Who are the chicken’s enemies?

What breeds are there?

There are about 175 varieties of chickens. They are grouped into 12 classes and about 60 breeds are based on geographical areas, Asiatic, American, Continental, English and Mediterranean.

The different breeds include:

Bantams — these are miniature chickens

Leghorns — the most popular commercial breed, usually white in colour.

Rhode Island Red Chicken — this is a very popular breed of chicken. Usually raised for their meat and eggs and sometimes as show birds.

What is the lifecycle of a chicken?

The hen does not need a rooster to lay eggs. However, the eggs will not hatch because they are not fertilized.

Chicken eggs come in different colours, such as white, brown, blue or bluish green and pink. The unique blue eggs come from the Araucana breed, from South
America.

Most chickens will stop laying eggs when the weather is cold and will restart when it warms up again.

Chicken is Britain’s most popular meat. We eat 12 times as much chicken as we did 30 years ago

855 million chickens are produced in the UK every year

Supermarkets are selling whole birds for as little as £4 — pound for pound that’s cheaper than some dog food.

Every day 100,000 birds die in standard chicken farms due to poor welfare conditions

We eat more than 10 billion eggs a year in the UK. As well as being sold whole, eggs are present as an ingredient in a number of foods including mayonnaise, biscuits and even wine.

Eighty-six per cent of these eggs still come from battery caged hens which do not have the freedom to express natural behaviour i.e. dust bathe, forage, roost and nest.

• The show is welcoming back the heavy horse showing classes,which include a ridden class and harness class. Fine examples of these majestic beasts will be on show, including Shires and rare Suffolk. punches.