Thoughtful drama is darkly funny about being responsible 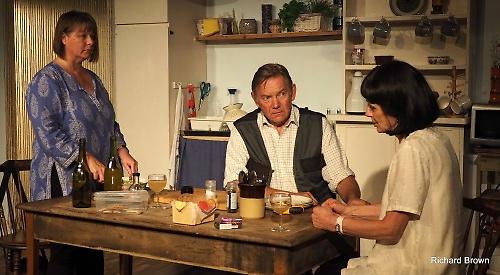 Hazel (Liz Paulo) and Robin (Peter O’Sullivan) are retired nuclear scientists who have retreated to a quiet domestic life following “the disaster”, an accident at the power station where they both worked.

Life is constrained, power is in short supply — but Hazel is dedicated to living the best life she can, feeding her husband on salad and practising yoga to stay fit.

Out of the blue, a former colleague, Rose (Melanie Sherwood), turns up to visit after 38 years. Why she has come is gradually revealed over the course of this engaging and moving kitchen-sink drama.

The Children is a resonant title. It becomes apparent that Hazel and Keith have grown-up children and grandchildren; Rose has remained unmarried and childless.

It’s easy to assume that a family is a passage into the future for ageing people. This play questions that assumption.

What future might there be for young people whose environment has been scarred by the actions and mistakes of previous generations?

We discover some glitches in the long and supposedly happy marriage between Hazel and Robin. We also discover more about Rose’s plan to take responsibility for what happened at the power station, rather than leaving the younger workers — the “children” — to put things right.

This is a visually arresting production. The play opens with a nose bleed and ends with Robin coughing blood — real, red blood as a symbol for the bloodlines hinted at in the play’s title, the generations to come threatened by modern technology.

Trevor Dale’s realistic cottage set conveys tradition and homeliness, rather than change and science: arguably, Hazel — and to some extent Robin — are in denial as they continue to pursue the good life while staring death and destruction in the face.

The dance and yoga routines make it clear that, for all Rose’s vivacity, it is Hazel who takes the lead as the more dominant woman.

The final scene — Robin with mop and bucket in hand — visually conveys a central theme: that it is for the older generation to clear up the mess they have made.

This three-hander skips along at a good pace and the dynamic between the characters is strong.

When you go to see The Children, you will be treated to first class performances from Paulo, Sherwood and O’Sullivan.

This play has much to say about the modern world and the superb cast gets the message across with humour, tenderness and credibility.