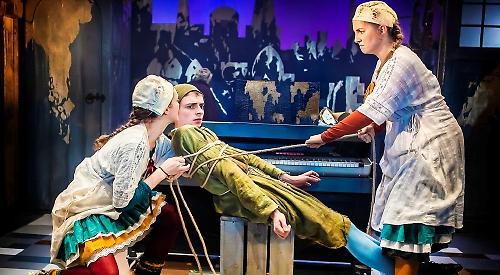 The Prince and the Pauper | The Watermill Theatre, Bagnor | Saturday, November 16

IN The Prince and the Pauper, Mark Twain wrote what has been described as “an enchanting tale” about two young people from completely different backgrounds whose worlds collide when they exchange clothes as an adventure, little anticipating the consequences such an action would have.

With adaptation and lyrics by Chinonyerem Odimba and music and lyrics by Tarek Merchant, it is basically a morality tale with the message that we are all equal under the skin, and is what the Watermill Theatre at Bagnor has chosen for its Christmas show, playing from now until Saturday, January 4.

While in no way could it be described as a children’s Christmas show, being much more suitable for older children, the Watermill’s production comes over as a carefully produced piece of theatre, but seems to lack the sparkle of previous Christmas productions.

Odimba and director Abigail Pickard Price just seem to miss the target, and this reviewer couldn’t decide who jogged whose elbow in this.

Choreography by Claira Vaughan combined with Merchant’s music was quite adequate, but didn’t come over as particularly festive.

It seemed to concentrate more on poignancy and pathos over the condition and relationships of the main protagonists, and while this was in keeping with the plot, it deprived the audience of any memorable dance numbers or lively choruses which are things people have come to expect from a Christmas show.

Being the Watermill there were, of course, some superb performances by the actor-musician cast.

Stacey Ghent was a sheer delight as part-narrator Bette, taking time out to become a very endearing dog, as was Hayden Wood doubling as the rather comically dying king and Father Canty.

Anne-Marie Piazza’s performance as Lady Whatsit was also a highlight, putting over her songs so well that the audience wanted to burst into spontaneous applause — only prevented from doing so by the action being pushed along to another scene.

It was unfortunate that the director didn’t allow the audience to become more involved.

All in all, this is a laudable and well-performed show, but it could be considered a rather strange choice for a Christmas production.

You’ll have to judge for yourselves.