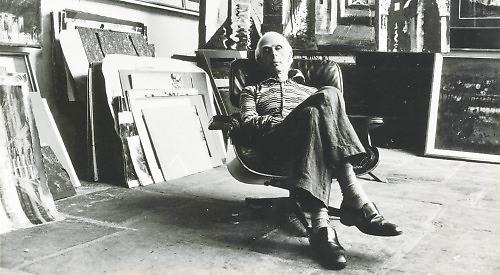 The artist, who lived in Fawley Bottom until his death in 1992, aged 88, has a gallery dedicated to him at the museum in Mill Meadows.

A River and Rowing Museum spokesman said: “This will be a rare opportunity to see String Solo, an early work by Piper that has recently been conserved from the museum’s collection and will only be on display until summer 2020.

“Dating from 1934, String Solo represents a final stage in Piper’s progression towards complete abstraction. It is the culmination of a series of paintings produced during the early Thirties, inspired by the English coast.

“John Piper is one of the most prolific and versatile British artists of the 20th century. The museum’s gallery features works from private and public collections, many on display for the first time, which demonstrate Piper’s outstanding ability to diversify from paintings and drawings to stained glass and ceramics.

“The gallery is also shining a spotlight on Piper’s Stones and Bones portfolio. Published in 1978, this ambitious set of 27 prints reproduced the artist’s work across a wide range of media, including drawings, sketchbooks, collages and photographs. Piper called the portfolio Stones and Bones, to reflect his belief that objects in the landscape take on the character of the human figure.

“On display will be a selection of prints from a rare copy of the portfolio which illustrates the breadth of Piper’s interests, his mastery of printing and his fascination with objects in the landscape which go unnoticed, from neglected ruins to hidden church monuments.”

The screenings are part of “The Snowman and The Snowdog” exhibition, which is running until January 19.