Drama’s a timely reminder of a more hopeful era 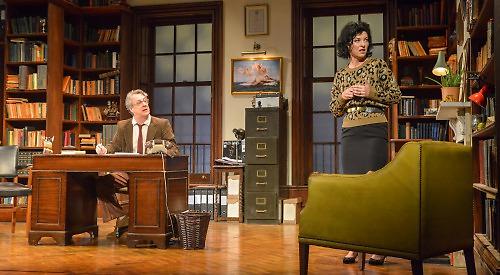 IT was 1980 when Educating Rita opened in London, and this affectionate and attentive new production, which is beginning a UK tour at the Oxford Playhouse, marks the 40th anniversary of Willy Russell’s famous stage play.

I guess many people in the opening night audience remember the 1983 film version starring Michael Caine and Julie Walters that opened out the action and introduced extra characters.

Russell’s original play, wisely unaltered, not updated, is a two-hander played out on one set. It focuses on Frank, a boozy, jaded Open University lecturer, and Rita, the young hairdresser who breezes into his life looking for a way out of hers, by means of education.

Jessica Johnson as Rita literally crashes into the action as she struggles to open the door to Frank’s book-lined study.

The door is jammed — symbolising her struggle to enter the world of higher education? — and next time she brings a can of oil to make things easier. That’s definitely a symbol of her practical, no-nonsense approach to life.

Meanwhile Frank, as played by Stephen Tompkinson, has more than a jammed door to worry about. He’s a failed poet, constantly raiding his shelves not for the books but to get at the bottles hidden behind them. He lives with off-stage Julia who worries that her cassoulet is getting burnt while he prefers to go to the pub rather than return home.

Rita has to contend with a husband who expects her to stick to her hairdressing salon or, preferably, start producing babies for him. But she wants to learn the difference between the two Wildes, Kim and Oscar.

Both Rita and Frank are trapped. His dreams are behind him, hers ahead. She regards him and his cultured life as a way out. He eventually comes to see her weekly visits as a lifeline.

At first Stephen Tompkinson’s ruffled and rueful Frank is appalled by her comparison between Virginia Woolf and Jackie Collins, but he comes to appreciate, then to love, her openness and good sense. And to love her too.

Is that love returned? You’ll have to see the play to find out. Enough to say that the touching grace note at the end is somewhere between comedy and tragedy.

When Educating Rita was written the Open University was only a few years old while student loans and debt were a burden still to come. There was — arguably — a greater sense of hopefulness and more class mobility. A touch of the Sixties hangs over the play. This new production, directed by Max Roberts and produced by David Pugh, reminds us of that innocence and hope.