Foreboding woodland and my disaster wading through flood water 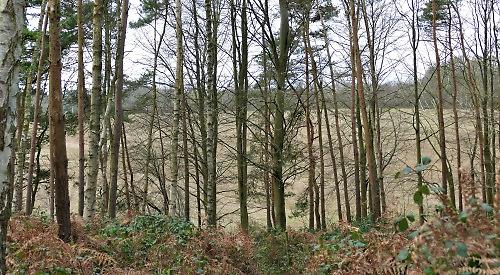 MY friend Matt Coome calls round to pick up Rosemary and me and then we’re off to Binfield Heath.

We park across the road from the village playground and take a path that leads to a side road and on towards Kiln Farm. Alongside the path snowdrops and daffodils are coming into flower.

Leaving the housing behind, we turn northwards on to a footpath and enter a large field via the remnants of an old stile. There’s woodland to our left, an old mixed hedgerow to our right.

As the hedgerow ends, we enter another wider field. The wind whips up over the broad open landscape. It’s a lovely sweep of land. Carrion crows and red kites fill the sky.

In the distance I see a Scots pine plantation. On reaching the trees, the incline is rather steep.

Silver birch has made its presence felt, some specimens with gnarled old trunks would not look out of place in an illustrated book of fairy tales.

Honeysuckle winds upwards through its hosts, leaves already emerging. This will be a fragrant place to visit on an early summer’s evening.

We emerge from the plantation into another field. Some of last year’s maize crop has been left unharvested. Cover for ground-nesting birds perhaps.

We enter High Wood. Predominantly populated by mature, sturdy beech, there is also oak, sweet chestnut, cherry, silver birch and sycamore in good numbers. Again, there is a lot of honeysuckle or woodbine clambering about.

There has been an archaeological dig going on here over the last few years. There was speculation that the site was once occupied by a Roman villa but the floorplan and wall foundations indicate that the buildings were some old workshops.

Matt’s father-in-law instigated the first dig and Matt tells us that some chainmail had been found. It gives one a sense of the passage of time, the majesty of nature and how it will always reclaim the earth.

It is humbling when you think about it.

Incidentally, some Roman roof tiles have been incorporated into the floor of the local pub, the Bottle and Glass. There is plenty of clay out here so the tiles were almost certainly made locally too.

We leave the splendid wood behind and join a lane that leads eastwards towards and past Upper Bolney House.

We encounter a large specimen of white poplar (Populus alba) just inside a private garden.

When in leaf and there is a breeze, the leaves create an unforgettable soft rustling as they flutter to reveal their near-white undersides.

Some 30 yards from a convergence with Woodlands Road, we take a right-hand turn and head south across another field bearing the vestiges of last year’s brassica crop.

Ahead of us lies Upper Hailey Wood, which Rosemary instantly describes as sinister.

A native woodland edge is dominated by an overtly twisted oak that seems to be pleading for help to escape the dark and brooding clutches of a plantation of Douglas fir that forms the interior.

The macabre conifers loom threateningly. As we enter the gloomy canopy, the plantation does indeed exude a forbidding countenance.

To add to this creepy aspect the remains of an eviscerated roe deer lies beside the path, a sole leg with hoof is nearly all that remains. A sad sight.

As we continue through the wood, we enter a long avenue of hornbeams that display their tell-tale silvery bark on twisted trunks. Laurel bushes (Prunus laurocerasus), normally planted for evergreen hedging, have evolved into small trees.

Two-needled Austrian pines normally planted for ornament or as a windbreak are also present in Lower Hailey Wood.

We leave this curious wood behind and emerge into the open to find a well-maintained hedgerow to our left and a line of ash and oak to our right. Underneath the trees spindle, dog and field rose, bluebells, woodspurge and lesser celandine are beginning to move to the season’s dance.

A tractor is turning the earth in an enormous field to the north side of Memorial Avenue in Shiplake. At least 16 red kites and hundreds of black-headed gulls follow the ploughshare as it turns the rich earth.

We turn west along another old lane. Something in my bones tells me that this may be a very old road that once crossed the now ploughed field towards Mill Lane in Shiplake. It makes absolute sense.

The lane is gravelly now and punctuated with bricks. We pass an interesting maple that will be identified when in leaf.

As we progress, the first fields that we crossed take on a new aspect as we view them from afar. Their beautiful sculpted, gentle, smooth contours revealed from previous and unintended agricultural artwork.

Disaster strikes! Only a few hundred yards from our entry point the lane is under water. It looks truly deep.

Matt scrambles past on a bank holding on to the hedge to his right and emerges unscathed. Rosemary does the same but nearly falls backwards into the water.

I, on the other hand, wade in. Alas, I’m wearing my lightweight summer boots, not my waterproof ones, and halfway through my feet are wet and cold. I emerge sheepishly, much to Rosemary’s delight.

We make our way back to Matt’s car and admire a wonderful mimosa along the way.

A few yards on I spy a stinking hellebore (Helleborus foetidus) over a ditch to our right. A member of the buttercup family, it is poisonous.

According to my copy of The Flora of Oxfordshire (Killick, Perry and Woodell, Pisces Publications, 1998), it is a rare plant listed in just 11 sites in the county. I can add three more places to that tally now.

Matt drives us home and I agree with Rosemary to take another short expedition before a powerful wind arrives.

The next morning I take a look out of the window. Two greater-spotted woodpeckers (Dendrocopus major) are on a birdfeeder. Such handsome birds.

We make the short journey to Sonning Eye, park up and venture through an alleyway, cross the old bridge into Berkshire and join a path that will ultimately lead to St Patrick’s stream, where it meets the Thames.

The river water is becoming much clearer. I look for a lurking pike below a willow’s dipping boughs but see none. There is a huge gathering of Canada geese here but, surprisingly, that’s it birdwise today.

The riverbank is full of old, broad-trunked and sometimes snapped willows. (If you take a willow’s branch and simply stick it in the ground you’ll have a tree, believe me.)

A fallen tree prevents further progress so we don’t meet the waters joining but it has still been a most enjoyable walk.

The sky is full of cirrus clouds framed by a glorious blue sky. We’ll return. Like every place we visit, there is always the promise of nature’s splendour to come. Isn’t our landscape wonderful?