If you go down to these woods, you’ll be surprised by odd-shaped trees 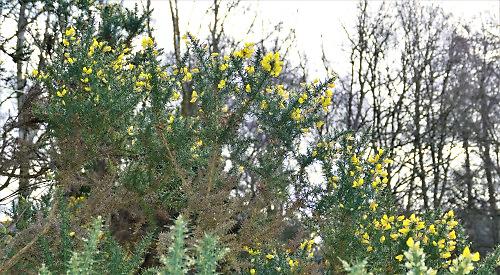 WE are out at Kingwood Common with my tree expert friend Dave Kenny. It is a fine day with an azure sky and a gentle breeze.

Entering the woodland from Barn Farm, just a small way from the former Grouse and Claret pub, we check on the site of the biggest congregation of broad-leaved helleborines (a handsome native orchid) that I’ve ever encountered.

I’ve been here many times before but I do like to revisit some of my favourite places at least four times annually. The previous year’s stems stand protectively, sentinels that guard the coming summer’s inflorescences.

Tutsan (Hypericum androsaemum), a member of the St John’s Wort family, is a fixture here. I snaffle a few berries to take home and poke into our garden’s soil. With hope they will grow.

The majority of this woodland, only 70 or so years old, is as magical as ever. Silver birch, aspen, beech, oak, cherry and holly comprise the bulk. Some crab apples, a lone wild service tree and a young yew add to the spectacle.

This is one of those woods where the visitor can expect to come across some odd-shaped trees. Honeysuckle is all around. Western hemlock-spruce is regenerating.

After passing some extraordinary beech trees that were once part of an old boundary hedgerow and are now an impressive wall of sylvan sinew, we meet Colmore Lane and head south towards Peppard Hill.

A number of trees has fallen in different directions as if a giant hand had been playing pick-up sticks in the night.

These include a veteran ash that Dave had previously measured and recorded. For an ash it was a monster and Dave is visibly upset at its demise. Colmore Lane is quite lovely. It stretches from Witheridge Hill and on to Peppard Hill and Common.

Come the end of April and the beginning of May, it will take on a new aspect, its hewn wayside banks covered with swathes of wood melick (Melica uniflora), one of the most pulchritudinous woodland grasses in the British Isles.

Lords and ladies (Arum maculatum) are unfolding at speed. Blink and they will appear to have grown in a trice.

The flowers of the common dog-violet (Viola riviniana) glow like tiny jewels. Glorious mosses adorn the lane’s bank and lichens grow on the slimmest of twigs, mostly grey-blue but some are a colour matching that of nearby gorse flowers that adorn the rough shrubs.

The air quality here is obviously cleaner than in our towns, the presence of lichens being a strong indicator.

On our way past a large property named Great David’s, we spot an old orchard to our left.

Dave and I look intently at each other. We’ve both missed it before but agree that it is more than likely that leaf cover in warmer days had hidden it from collective view. Two Scots pine are on each side.

We take a welcome break in the Unicorn pub for lunch and fine it is too.

We head back down Colmore Lane and after a brief while take a left turn into a patch of old heathland, a rare habitat in the Chiltern hills. Heather (Calluna vulgaris) and gorse (Ulex europaeus) are already in full flower. Hundreds of emerging foxgloves possess a healthy demeanour.

We’re looking forward to a splendid display in the near future that would form a great backdrop to a picnic. This site just cries out for one, especially in summer when full of butterflies and grasshoppers.

When we return home I spot a female blackcap eating from a suet block, a new addition to our resident birds.

Rosemary has decided that I’m a robin magnet. Our little, plump and friendly fellow always follows me when I’m outside in the garden. He sits at my feet and asks to be fed with a cheeky quizzical glance.

I love his audacity and give in as ever with another palmful of food.

You cannot get any closer than this to nature and, smiling, I reflect on how wonderful it all is.