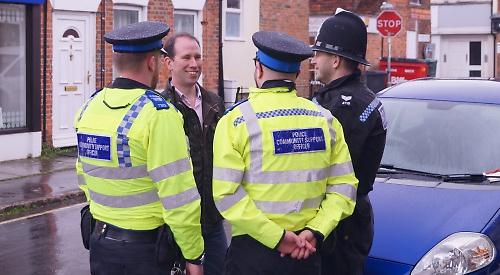 MORE police could be deployed to tackle illegal parking in towns in South Oxfordshire.

The move comes as the district council prepares to take over responsibility for parking enforcement from Thames Valley Police.

It has been welcomed by Ken Arlett, the Mayor of Henley, where illegal parking has been a problem for years.

South Oxfordshire and neighbouring Vale of White Horse district are among the few areas in the country where parking has not been decriminalised and enforcement is still the responsibility of the police.

Decriminalisation would mean councils would take over responsibility for enforcing on-street parking restrictions, such as yellow lines and loading bays, and tickets and fines would be issued by wardens.

Now the deputy police and crime commissioner for the Thames Valley has called on the two district councils to help pay for extra police enforcement in the meantime.

“I would urge both South Oxfordshire and Vale of White Horse district councils to work with their town councils to come to a suitable arrangement to provide adequate funding for police community support officers to continue this work on parking enforcement.

“The initiative being launched now will provide for much-needed targeted enforcement but it is not sustainable in the long term without support from local councils.

“Decriminalisation of parking enforcement is a common goal among us. Following the discussions I have had with the force, I am delighted that they are able to step up to the mark in the short term while the councils go through the necessary legal processes.

“I hope you will also recognise the benefit to local residents and be able to support the local police in providing this enforcement in the short term while the councils establish their own parking enforcement teams, which is their stated aim.”

“Since then we have been working with Oxfordshire County Council, Vale of White Horse District Council and Cherwell District Council to explore the business case for this and we have had contact with the deputy police and crime commissioner on the subject.

“A cross-authority, officer-led working group commissioned an initial feasibility study to consider different operating options available to the councils, including the required investment for such a scheme. The study’s results are due to be completed and presented to council officers in early summer.”

Councillor Arlett said: “I personally do not wish to see any vehicle with a parking ticket on it and would prefer that drivers respect the law but unfortunately some drivers are not doing this.

“The worst offenders are the drivers that block footpaths. If vehicles are now made to move from obstructing traffic, one of the big winners will be the local bus service that gets held up from time to time.

“I hope the message will soon get round that there will be zero tolerance for illegal parking in Henley.

“With the 20mph speed restrictions now in place and illegal parking displaced, it may make it easier to travel in and out of Henley.”

A Thames Valley Police spokesman said: “Our message to the public is to please park legally or you may be subject to an initial fine of £30. Illegal parking is not only dangerous but diverts precious police resources from their core role.”

In Henley, the town council already employs wardens to monitor parking at its car parks in Meadow Road and Mill Lane.

Councillors have previously called for their powers to be extended to include on-street parking and loading bays, which are often abused by drivers and prevent lorries being able to make deliveries.

The town council currently contributes £17,200 towards the cost of a police community support officer but says it will not pay more.

Previous plans to decriminalise illegal parking were held up as not all the councils were in favour.