Austen adaptation’s not as you know it 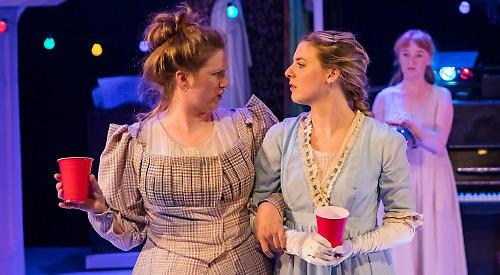 USUALLY if you take a wrecking ball to one of our most treasured literary icons you’d better be sure to smash it irredeemably or it might come back to bite you.

But somehow Isobel Macarthur’s witty, iconoclastic steamroller of a script manages to both destroy and preserve Jane Austen and one of her best known works, Pride and Prejudice.

It’s a remarkable feat because everything we might understand about this genteel lady of impeccable morality, manners and speech is upended — but at the end it’s still the same Mr Darcy hooking up with the same Elizabeth Bennet.

But this is not the Georgian novel we know so well; this is the bones of the story with the gentility stripped out and replaced with modern profanity and characterisation in a knowing retelling.

It references the novel, obviously, but also everything we’ve come to know about Jane. But it also draws heavily on the 1995 BBC series which featured “that” scene with Colin Firth emerging from the lake at Pemberly.

It can be uneven, with songs used heavily in the first 20 minutes and then almost abandoned. But the direction is pacy and there are some cracking ideas — a scene with Darcy writing to Elizabeth is especially well-handled.

We never see Mr Bennet, all the roles are played by an all-female and extremely versatile cast, and profanity drips from their lips like rain from the sky.

They lust after men’s physical forms, they behave the way that humans do and in this 21st century now openly acknowledge. That’s where the joke lies — in the application of modern womens’ attitudes to a late 18th century situation.

Of course they will rail against the injustice of having not only no vote but no rights and they voice that in forthright Anglo-Saxon. They may be cooped up in a Hampshire vicarage but their banter is from a city centre hen night.

The male characters are equally lustful and unmentionable bodily functions weave in and out of the narrative as if they were clouds on a changeable day.

No, this is not Jane as we know it, but would she have adopted this dialogue if writing now? We can only hope so.

It’s great fun and if you look deep enough you’ll find the same old challenges women seem to have faced through the centuries.

But one word of criticism — it’s 10 minutes off three hours and that’s too long to sustain the joke. If it lost 30 minutes it would help.