Ambling through an arboretum admiring some enormous Americans 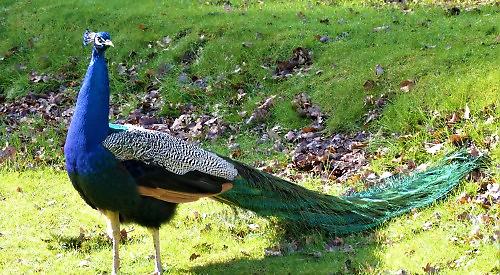 AT last we have some respite from the almost continual rain. The sky is blue, bright and populated with fluffy cumulonimbus clouds.

We pick up my mother and after another spending spree at Toad Hall garden centre, we’re assailed on our departure by the shrieks of ring-necked parakeets (Psittacula krameri).

Considered an agricultural pest in the Indian subcontinent, they are becoming commonplace here in the south of England.

No one is quite sure how they have made a new home here (presumably after escaping from confinement) but we’ve got them now and as long as they do not disrupt our native birds’ food supply, then they are welcome. They are certainly handsome, garrulous birds.

Red-legged partridges with an IQ of zero look surprised as we try to avoid them as they scuttle up the sides of the holloway on our descent of Aston Lane.

We dive into the Flower Pot pub for lunch — ham, egg and chips like no other. When we leave the pub there are those silly birds again.

We ascend the narrow road before bracing ourselves to sail down White Hill, with its perilously leaning beech trees, and back home through Henley.

The weather forecast seems favourable but can we trust it after last week? Well, we’re going for it come what may.

We arrive at the Harcourt Arboretum near Nuneham Courtenay, some six miles south of Oxford. Owned by the University of Oxford, it runs to some 130 acres in total. This is my first visit and long overdue too. I’m immediately stunned by the range of trees that I see.

Walking south from the car park, you are presented with a choice between the Arboretum Amble, a simple mile’s walk around native woodland and wildflower meadows, or a walk that winds through the Old Arboretum via a grassy path. We opt for the former.

Peacocks and peahens wander around The Lodge and ticket office, seemingly tame. I do advise visitors to keep some distance from the showy males that can fly off the handle in a flash, especially during April’s breeding season.

As we progress along the path, I’m taken by the amount of old English oaks that stand proud as if in protest at the din of traffic roaring up and down the A4074. In between the old trees a large tally of many species and cultivars of maple are growing. I’m stunned by the sheer number.

Our path takes a bend to the right and heads westwards past a picnic area and a large shelter surrounded by a smallish coppice. The noise from the busy road has gone.

Here we meet a bluebell wood so vast it defies belief. Sitting among oaks, beech and other native trees, it will be a welcome sight come late spring.

This is part of the arboretum that consists mainly of native species, the sole exception being a roble beech, or Patagonian oak (Nothofagus obliqua), a native of Chile and Argentina and capable of reaching 50m or 170ft. I’d love to be able to travel into the future to see what becomes of it.

A notice advises us that limes or lindens once made up a large proportion of our primeval forests. I know this to be true from pollen records so I presume that they are the small-leaved lime (Tilia cordata) and not the common lime (Tilia x vulgaris).

My confusion lies in the large number of suckers, normally a giveaway for the latter. I’ll have to return to confirm either way and if the seed leaves have jagged tips I’ll know their true identity.

Under the lime trees bluebells have given way to dog’s-mercury and primroses, which are at their peak. A lone wild service tree grows like a rod of iron at the woodland edge. One thing of note is the solid wooden benches that line the trail and add to the welcome. A nice touch. This is a walk for people of all ages and abilities to enjoy.

A green woodpecker yaffles. Rosemary and I exchange a glance as we know what this means and smile. A greater spotted woodpecker flies through the trees and disappears around the back of an old oak. Small birds are all around chirruping and obviously pairing up.

We leave the woodland behind to be presented with a splendid stand of Scots pine (Pinus sylvestris) that sits in open country. What a handsome sight it is. A pair of buzzards and a red kite soar above. The path takes us eastwards past more old oaks, some of them forming glorious shapes against the nearly clear sky.

We pass a rather large pond that my leaflet tells me is occupied by bogbean (Menyanthes trifoliata). We’ll look out for its white five-petalled flowers on summer’s approach.

As we near the end of our walk and return to our starting point, the real fun starts. I feel tiny in comparison to some of the trees here in the Old Arboretum. Coastal redwood (Sequoia sempervirens), a member of the cypress family from western North America, tower above us. The trees here are comparatively young but back home they can live for more than 1,500 years, one of the oldest living species on our planet, and grow to heights in excess of 370ft.

Giant redwood (Sequoiadendron giganteum) from California rise above my insignificant frame. Some in the wild are known to be at least 3,200 years old and over 300ft tall. I feel like an ant by comparison.

California nutmeg (Torreya californica) has the scent that its name suggests. Incense cedar (Calocedrus decurrens), another native of California, is also tall with a trunk that nearly always splits into two and is so elegant.

Two more natives of western North America are Western yellow-pine (Pinus ponderosa), which can shoot to well over 200ft, and Brewer’s weeping spruce (Picea breweriana), which is a slow grower with lovely pendulous foliage and rare both here and back home. Campbell’s magnolia (Magnolia campbellii), a native of the Himalayas, is bursting into flower.

What an absolute delight our day has been. It will be a regular fixture from now on, especially as we’ve only explored a portion and there is so much more to see.