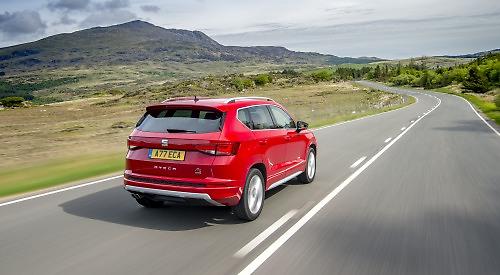 WHEN the Seat Ateca arrived on the market it was the Spanish carmaker’s first ever venture into the compact SUV (sport utility vehicle) market.

And Seat revealed recently that it was their motor show concept cars that paved the way for its current line-up of SUVs, which includes the Ateca.

Often when I have been to motor shows, particularly the very large Frankfurt show or the ones in Paris and Geneva, I am always immediately struck by the “wishful thinking” aura that surrounds concept cars.

These often-outlandish designs are there to get the new-car buying public’s taste buds tingling with the prospect of cars to come.

You might take all that with a pinch of salt as concept designs in their purest form rarely find their way on to the everyday production lines.

However, Seat says its conceptual designs have played a pivotal part in developing its current SUV line-up, which first started to emerge in 2016 and now accounts for 45 per cent of the brand’s UK sales.

The list of Seat’s concept models goes back nearly three decades. It includes the beach-inspired Marbella Playa Concept, the Salsa Emoción, with its three different drive modes, and the IBX, which says the carmaker, “signalled the beginnings of Seat’s electric SUV ambitions”.

But those concept ideas have borne fruit in 2020 because this category of smaller, compact, and stylish SUV has proved popular among buyers, especially those with young families.

There is good reason for this, not the least of which is an economic outlay on initial price but also lots of room for a family of say, two adults and two children. This is where the Ateca scores highly because it has one of the largest load areas in its class — 510 litres even before you move the rear seats and up to a maximum 1,604 litres (485 and 1,579 litres for 4Drive versions).

I liked the Ateca because as with its SUV brother, the Seat Arona, this “lightness of being” translated into comfortable handling but not at the expense of all-round stability.

If a car is literally a “lightweight” there might be issues of handling especially at speed. But the Ateca’s firm road presence as a result of suspension developed from proven designs featured in the Seat Leon, including multi-link rear axle for the 4Drive versions. There are five equipment grades for the Ateca — S, SE, SE Technology, FR and XCELLENCE.

Interestingly, Seat has released details of the complex arrangement of wires — more than 2.2 km long — that flow through the Ateca like the set of arteries, veins and capillaries of a human body. These electronics enable the Ateca to respond in a fraction of a second to technological and safety functions.

The Nineties was a key decade in the development of consumer electronic systems and cars also evolved with increasingly complex circuits. In some of today’s Seat models there are more than 12,000 unique wiring combinations, and this figure could increase in the future.

Seat has scooped accolades at the annual Tow Car Awards event for its popular SUV models. Taking the 1,400-1,549kg-category award, the Ateca was commended for its stability, punchy performance and overall practicality.

Based on the popular FR Sport, the Ateca FR Black Edition adds a number of features.

Available in Crystal Black, Nevada White, Velvet Red and Rhodium Grey, the Ateca FR Black Edition is priced between £28,845 and £35,180 on the road.

The Ateca FR Black is available with a range of powertrain options, from the 150PS 1.5-litre TSI EVO petrol unit to the 2.0-litre TDI DSG-auto 4Drive, all-wheel option offering 190PS.