It’s electric but you couldn’t tell 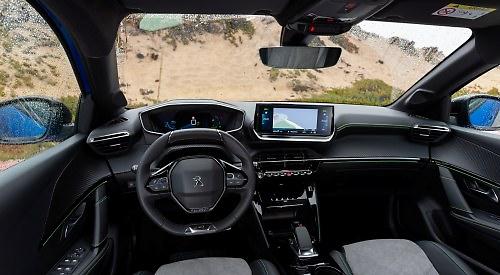 INEVITABLY this week I have been at the wheel of a 100 per cent all-new electric car.

I say inevitably because we are going to see a lot more new electric cars on British roads in future.

The all-new Peugeot e-208 is the first of a generation of electric models being produced by the French carmaker. It marks the brand’s commitment to offer an electrified version of its model range by 2023.

And the e-208 got off to a great start. Earlier this year the Peugeot 208 was named the 2020 European Car of the Year, a top car award. The panel of judges comprises 60 automotive experts from 23 European countries.

For new car buyers, the great part about Peugeot’s strategy is that you can choose a 208 with either an electric engine or an internal combustion engine. I have said for a while now that the key to owning an electric car is to have a dedicated domestic charger installed at home.

This will not be possible for everyone (for instance, if you live in a flat) but it is the ideal way of owning an electric car.

Charging points are mushrooming all over the country but to my mind it is still an issue whether you can get to one easily and conveniently.

Unlike a car with a petrol or diesel engine, you cannot just top up the battery in a matter of minutes. Sure, there are fast chargers but the best way is to treat your electric car like you would your mobile phone.

You come home at night from work and plug the car into your domestic charger then off you go next morning with a full charge.

Ideally, you would have a dedicated charging point at or near your place of work, so while you work you charge your car to take you home again.

How does the cost of running an electric car compare with a conventional car and what might you save by owning an electric car? Well, Peugeot did some pre-lockdown research that took the example of couples that might live apart but like to visit often.

With an average distance of 145 miles between the couples, petrol and diesel drivers, says Peugeot, would spend £16.50 and £14.90, respectively, per return visit.

I am glad that carmakers no longer believe that the electric car has to look different from a conventional car. The e-208 has the same winning design lines as the petrol and diesel versions. Indeed, the 208, along with the Peugeot 2008 SUV have received the 2020 Red Dot Award in the Product Design category for “sporty exterior designs”.

The interior of the car I have been driving mirrored that of more expensively kitted-out cars. The gear lever was satin chrome, and the piano keys — gloss black plated toggle switches to access main functions of the vehicle — were smart and handy.

David Peel, managing director of Peugeot UK, said: “We are collaborating with Polar Plus, the UK’s largest public charging network, to give new Peugeot electric or plug-in hybrid drivers a six-month free subscription to the Polar Plus network.”