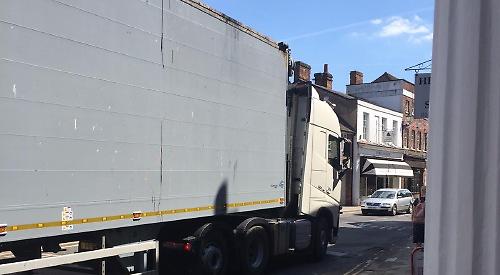 MORE heavy goods vehicles are using Henley as a “rat run” during the lockdown, says a resident.

Amanda Chumas, who lives in Bell Street, says she has noticed more lorries passing her home and is concerned about the safety of pedestrians and the impact on Henley’s historic buildings and on its air quality.

She has also witnessed HGV drivers flouting the town centre 20mph speed limit, which was introduced earlier this year.

Many struggle to negotiate the sharp left turn from Bell Street into New Street so their wheels mount the pavement near the office of estate agent Savills.

Mrs Chumas said this posed a danger to both pedestrians and property and because the lorries come to a complete stop to complete the manoeuvre it also causes congestion.

She is calling for a 7.5-tonne weight limit to be introduced banning larger vehicles with no business in the town from using it as a cut-through.

Mrs Chumas, who has lived in Bell Street since 2009, said: “I do feel concerned about the upturn in the number of HGVs going through the town.

“It has always been a problem but I’ve noticed it particularly in terms of the upturn over the last few weeks. They are cutting through Henley because the traffic levels are lower than they would normally be and because there’s little traffic they are going faster.

“When they are going straight down Bell Street towards Fair Mile they are certainly not doing 20mph.

“Other people in Bell Street would share the same view. The lorries seem to start very early at 4am.”

Most of the properties along the street are timber-framed and rendered so passing HGVs cause them to shake and even cause cracks in walls.

Mrs Chumas said she  understood that large vehicles had to service the town and make deliveries to the Waitrose and Tesco supermarkets.

But she added: “I’m complaining about people coming off the strategic network, which they should remain on, and deciding to come through the Oxfordshire villages in order to cut the time of their journey.

“They seem to be there every time I open my front door.

“It’s quite clear they are vehicles with long distance addresses on them.”

On Monday she photographed an Asda lorry passing her home.

Mrs Chumas said: “The driver was quite obviously doing a cut-through because ASDA has no store within a reasonable distance of Henley.

“People unfortunately develop a habit and they start getting into a pattern and, lo and behold, we have a problem.

“Our town is ancient. The historic layout of the old town gives rise to narrow roads and narrow pavements, which are often busy and used not only by residents but also visitors.

“Indeed, in certain parts of town the pavements are so narrow that large vehicles overhang as they pass, as can be seen from the damaged and misaligned road signs which have been hit by them passing.

“We need to address this once and for all and make HGVs that do not have any business reason here to stop within a reasonable radius from using our town as a cut- through.

“Instead, they should be mandated to remain on the arterial roads which form the strategic road network. We need to protect our personal safety, the fabric of our town, including that of its historic listed buildings, and, most importantly, the quality of the air that we breathe.

“A large contributor of that poor quality is from HGVs that come through Henley rather than ordinary traffic.”

Mrs Chumas said she would also like to explore with businesses a prohibition on night time movements between 11.30pm and 6am so that residents’ sleep was not interrupted as much as it is at present. In order to enforce such a ban, mobile cameras would be needed.

Councillor Stefan Gawrysiak, Henley’s representative on the council, said he would be pursuing a weight limit for the town.

“It would still allow deliveries into Henley and the neighbouring parishes but it would stop the through traffic,” he said.

Previous attempts to ban through HGVs have fizzled out.

A weight limit for Henley Bridge was proposed by the town council in 2014 but the county council said nothing could be done until a similar scheme had been introduced in Burford, which had been waiting years.

In 2017 David Nimmo Smith, Henley’s then representative on the county council, suggested heavy goods vehicles could be banned from Henley from 11pm to 6am.