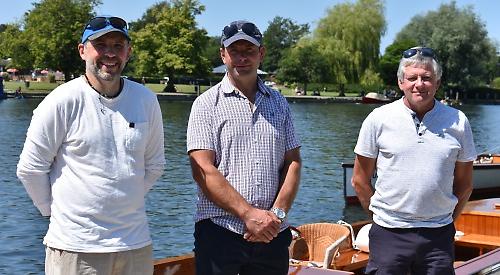 The vessel, which cost more than £100,000, was unveiled in what would have been the week of this year’s regatta before it was cancelled due to the coronavirus pandemic.

It is a gift from regatta member Raymond Butt, who died in 2017 and left an undisclosed sum for the boat in his will.

The launch is called Boadicea after the queen of the Celtic Iceni tribe and brings the total number owned by the regatta to six.

The vessel was entirely hand-crafted by RDL Developments, of Norfolk.

It was christened at the Hobbs of Henley boatyard off Wargrave Road by Sir Steve Redgrave, who chairs the regatta’s committee of management.

The small ceremony was attended by about 10 people who watched him pour a bottle of champagne over the bow.

Sir Steve thanked the craftsmen who built it in six months, Paul Dennis, Roy Lawson and Stephen Bride, and said their work was “absolutely stunning”.

He said: “I’m very honoured to be able to name her.

“Now we own six launches, which is the right number we need to run the regatta. We may not be purchasing another one for a good few years. Boadicea is going to be top dog for many years to come.”

The craftsmen then took Sir Steve on a trip downstream to Temple Island and back.

Sir Steve also expressed his gratitude to Mr Butt, who became a member in 1969, and his family.

He said: “We didn’t hear anything about it until his will was read and we were informed we were beneficiaries.

“It’s sad to see one of our members go but it was an unbelievably generous gesture and it’s great to produce this launch in his memory.”