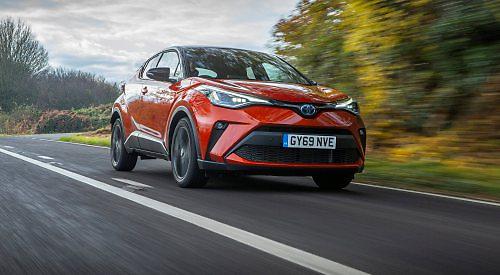 THIS week I have been driving a car that eclipsed the range anxiety associated with all-electric cars.

Range — how many miles an electric car can go before the battery runs out — has been improved on all-electric cars now coming on stream.

Carmakers had to do this to entice motorists to buy electric cars. We are told repeatedly that electric cars are the future.

However, for distance driving and what I would term “normal” driving habits, the Toyota C-HR self-charging hybrid at present seems a much better bet.

An electric car functions on a finite amount of power stored in a battery. That is its sole source of power.

A self-charging hybrid, such as the Toyota C-HR, functions in a much more satisfying and reassuring way.

On a self-charging hybrid you do not have to plug in to charge the batteries separately. Instead, on-board systems top up the batteries as you drive. Energy recovery is also generated during braking.

The new C-HR offers motorists the choice of two self-charging hybrids, with the introduction of a new 2.0-litre powertrain at the top of the range. The C-HR entered the market as Toyota’s first compact crossover in 2016. The self-charging hybrid has proved to be very popular. In Britain, C-HR sales topped 14,600 in its first full year in showrooms.

The new 2.0-litre system produces 182bhp, with 119g/km CO2 emissions. As well as greater power and higher efficiency, the 2.0-litre hybrid versions of the C-HR have upgraded suspension and improvements to counter noise and vibration.

This makes for a pleasurable and comfortable drive. But the overwhelming thing about the C-HR for me was that it felt like a car fit for purpose in the 21st Century.

Power, comfort, reassurance of your ability to get somewhere without worrying about the car’s energy resource, these were all factors that made the C-HR stand out.

Its semi-futuristic design, for want of a better phrase, may not be to everyone’s taste but I felt very much at home in the C-HR.

Old-style motorists such as myself might crave large, petrol-driven V8 engines with bags of power available at the blip of an accelerator pedal but in the real, modern world, cars such as the C-HR are a much better fit.

Height adjustment has been added to the front passenger seat, while power driver’s seat adjustment is now standard on Excel models (optional on Design and Dynamic grades).

On the new model C-HR, improvements for noise and vibration were identified by engineers and improved in eleven different locations. So, I found the cabin quiet even at higher speeds.

The battery packs are located beneath the rear seats, avoiding any intrusion into the load space.

One of the main attractions of the cockpit is its user-friendly technology. The switchgear and central 8in multimedia touch-screen are angled slightly towards the driver.

Audio sound is excellent from the new C-HR’s JBL Premium Audio system (an option for Excel and Dynamic models, the latter in conjunction with leather upholstery).

Lastly back to power in more detail: the full hybrid powertrain (petrol engine and electric motor combined) produces 182bhp/135kW yet is more efficient than and superior to the 1.8-litre system. Although power is greater by 50 per cent, fuel consumption is only 10 per cent higher. CO2 emissions are, says Toyota, the best in its segment.

AN apple pressing event will be held in ... [more]