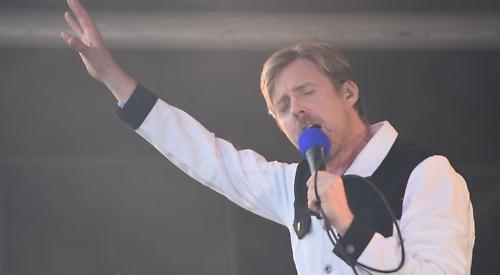 YOU would not predict a riot happening at the Pub in the Park drive-in “garden party” — and so it turned out.

More than 8,000 people attended the summer pop festival at Temple Island Meadows at the weekend, which featured chart-topping bands Kaiser Chiefs and Scouting for Girls, among others.

Organised by celebrity chef Tom Kerridge, it was the only event of its kind to be held this summer after the coronavirus pandemic wiped all music shows, including the Henley Festival and Rewind South, the Eighties extravaganza which is usually held on the riverside meadows in Remenham in August.

There were shows on Friday night and in the afternoons and evenings of Saturday and Sunday.

Fans had to drive into the venue and their individual “gardens”, wbhich were about 5.5m by 5m, and then stay with their vehicle and maintain a 2m social distance from each other.

The huge grassed area in front of the stage looked like a car park with rows of vehicles facing the performers.

Many people had brought folding tables and blankets for picnics while they enjoyed the music.

There were also stalls where fans queued up to buy hot food.

Some pople had pre-ordered their food when buying their tickets online and this was delivered to their gardens.

All the staff working at the event were wearing personal protective equipment.

The organisers feared they would have to stop the music due to people ignoring the covid guidelines and by dancing conga- style in front of the stage.

Security staff had to step in and tell people to return to their cars.

Only those who had paid extra to be in the VIP area nearest the stage were allowed to remain.

People were dancing in their gardens as the band ran through their hits, including Ruby, I Predict a Riot and, finally, Oh My God.

He also told the “VIPs”: “You at the front don’t know what you’re missing, the back people are doing donuts.”  Sunday’s performers were Scouting for Girls, and Gabrielle.

Singer-songwriter Cecil, who had replaced Craig Charles, perfomed acoustic covers, such as Iris by the Goo Goo Dolls, with which the crowd sang along.

Scouting for Girls performed their hits, including Heartbeat, and I Wish I Was James Bond. Fans sat on their car roofs as they sang along with lead vocalist Roy Stride.

At one point, he encouraged them to join in Everybody Wants to be on TV but replaced the words with “Everybody wants to live in Henley.”

In the evening, the performers were Steve Harley and Cockney Rebel, Squeeze and Leon Tilbrook, son of Squeeze singer and guitarist Glenn Tilbrook.

He said: “It was a really good day. We were celebrating my wife Karen’s birthday and the event was really accommodating.

“We think they could have done more with the food and drinks, such as having more options, but it was a nice thing after the regatta and Rewind were cancelled.” Karen Thatcher, of Gainsborough Hill, Henley, said: “I enjoyed Kaiser Chiefs. They were really good. I think the event was very well organised.”

Mr Kerridge, who runs the Hand and Flowers and the Coach in Marlow, had a bar and grill selling burgers, churros and beer.

He said: “It was fantastic to get back to doing what we love, giving people great food to enjoy while watching their favourite artists — you just can’t beat it.

“Kaiser Chiefs are one of my favourites and they played an outstanding set.”

• Pub in the Park was run in association with the Henley Festival, which will receive £3.50 from every ticket sold in order to ensure its survival.