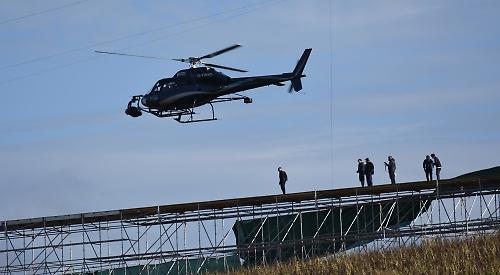 TOM CRUISE has been spotted rehearsing for the new Mission Impossible film in South Oxfordshire.

The star was photographed on a 135m temporary motorcycle track that has been built in a field in Ewelme by the production company behind his 2018 hit film Mission: Impossible — Fallout.

Jupiter Spring Productions is using an old quarry for rehearsals for the next film, the seventh in the series, which is due to be released next year.

Cruise, 58, was seen leaping from an off-road bike as it left the ramp at high speed, with both the actor and bike attached to safety wires.

The actor, who plays Ethan Hunt, leader of the fictional IMF team, has already been seen practising his stunts elsewhere in an Oxfordshire field during the covid-19 lockdown.

He reportedly raced around a dirt track on a motocross bike before piloting a helicopter.

Last month, Cruise shared a video of himself touring London in the back of black taxi.

He was seen driving past Buckingham Palace and waving to fans outside who recognised him even though his face was covered.

He joked: “How does that happen? I’m wearing a mask.”

He said: “Great to be back in a movie theatre everybody.” Asked by a fellow film-goer if he’d enjoyed the film, he replied: “I loved it.”

Vanessa Kirby and Rebecca Ferguson will be reprising their roles in the latest Mission Impossible film, which will be directed by Christopher McQuarrie, who also made the last two installments, Rogue Nation and Fallout.

The quarry was used last year to shoot a scene for 1917, a British war film directed, co-written and produced by Sam Mendes that was released later in the year.

Cruise also stars in a sequel to his 1986 film Top Gun, which has also been delayed until next year due to the pandemic.