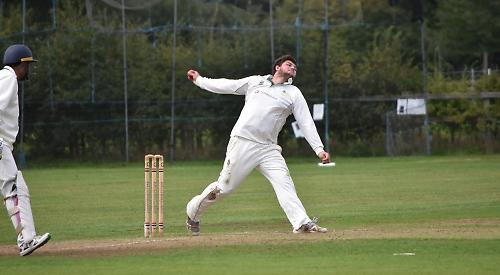 HENLEY 2nds may have regretted putting AMERSHAM 2nds into bat after they slipped to a 96-run defeat in their Division 2A clash on Saturday.

Having won the toss, Henley’s bowlers found the going tough against Amersham’s openers who put on 89 before Simon Groves edged a Cameron Jacobsen delivery to Tom Jordan for 36 runs.

Chris Fleming then shared a 64-run stand with Oliver Haddock, who hit two sixes before he was bowled by Chanula Wickramaratna for 28 runs with the score on 153.

This brought to the crease Dan Colquhoun who, with Fleming, eventually put the game beyond Henley’s reach.

Fleming was eventually caught by Ben Purchese to give Wickramaratna his second wicket, having hit 86 runs comprising six fours and one maximum, to make it 245-3.

Colquhoun continued to pile on the runs, smashing nine fours and four maximums in an unbeaten innings of 77.

Henley did grab a fourth wicket, that of Paul Weston, who was run-out by Purchese for one run from three balls, leaving Amersham on 262-4 from their 40 overs.

Simon Wheeler was the most economical of the bowlers, conceding 29 runs at over three an over, while Wickramarantla and Hugo Laing both conceded more than seven runs from their spells.

Jacobsen was also expensive, conceding 65 runs from his eight overs with an economy rate of more than eight runs an over. Nathan Hopkins’s one over went for 11 runs.

Only two other batsmen made it to double figures are Purchese ran out of partners in the middle.

Fellow opener Liam Hilditch made 29 runs, including five fours, before he was bowled and Prakash Gurung was the next highest scorer with 11 before he fell the same way.

A half-century from Manpreet Singh guided KIDMORE END to a three-wicket win against WOKINGHAM 2nds in Division 2B.

Kidmore won the toss and elected to field, hoping to take advantage of a wicket that was soft and damp.

But it was the visitors who got off to the better start, notching up their first 30 runs with ease with some hard hitting and poor bowling from James Frost.

Frost then redeemed himself by running out Stuart Hayter without scoring with a flick on to the stumps as Wokingham slipped to 45-2 from eight overs. While opener George Horsley cruised to his half-century, Kidmore’s bowling changes dried up the runs for his batting partners.

James Walker, making his first appearance in the first team this season, took a wicket thanks to a good catch by Guy Ashby at short extra cover, making the score
45-3.

Horsely then struck Ashby for a mighty six before falling for 51 runs as he advanced down the wicket to try and launch the next ball the same way.

But Ashby’s flighted delivery deceived him and allowed keeper Anthony Holland to stump him.

The game then became one of attrition, only to be interrupted when Walker was struck on the head whilst bowling and taken to hospital with blood running from his ear. He would later return bandaged up.

From here Kidmore bowled accurately, making the batsmen fight for every run, which led to a flurry of wickets in the final overs, including two more run-outs, both by Singh.

In reply, Singh and Jake Easton, who opened for the first time together, took quick singles and turned twos into threes with their impressive running between the wickets.

The pair put on 70 for the first wicket in the first 15 overs and when the partnership was broken Singh had 43 of the runs and Easton had 10 when he was stumped.

Jeff Sheldon came in and took over the anchor role from Easton and Singh continued to play fluidly, pulling the ball confidently throughout the innings.

They put on 37 runs for the second wicket and when Sheldon was caught for seven runs, the score was 107-2 with more than half the overs still to go.

But Singh fell almost immediately after Sheldon, caught out for 74 runs. Ashby then settled the innings, striking poor balls to the boundary.

With just 46 runs required to win Kidmore had a wobble of alarming proportions, triggered by Jake Leach being bowled for six. He was quickly followed by Ajinkya Gothoskar, Holland and Ashby as four wickets fell for 16 runs.

With the score 155-7 and Walker unable to bat following his injury, Wokingham were in the ascendancy.

But the opening bowlers Frost and Tygai saw their side home in the 38th over with a combination of deft flicks and quick running.

An unbeaten century from Luke Taylor led WARGRAVE 2nds to a 137-run win against BAGSHOT 2nds in Division 4A.

He was ably supported by wicketkeeper batsman Dan Ormond at four, who hit 91 runs before he was trapped leg before wicket.

Useful contributions from Kieran Lall, who was run out for 28, and Adit Rajeev, who ended not out on 24, helped their side to 295-4 from 40 overs.

In reply, Jarryd Wallace and Alex Hands both took three wickets as they removed four of Bagshot’s top five batsmen.

When Hands trapped Michael Davis leg before wicket for 40 runs, which included seven fours, Bagshot never looked likely to get above the required run rate.

Bagshot ended their innings on 158-9 from their 40 overs.

In Division 4B, HARPSDEN was unable to post a competitive first innings score and so slipped to a five-wicket defeat at the hands of GERRARDS CROSS 2nds.

Having been put into bat, Harpsden’s Harry Hawkins top-scored with 28 as seven batsmen were unable to break into double figures.

Will Stevens made 19 runs, Stefan Franklin 15 and Blake Hogan-Keogh 11 as their side was dismissed for 121 within 35 overs.

In reply, Hogan-Keogh took two wickets but Gerrards Cross never looked in any real trouble. Toby Lane and Ross Fyfe, unbeaten on 32 and 12 respectively, completed the chase, ending on 125-5.

Sean Taylor took four wickets for HENLEY 3rds as they slipped to a two-run defeat to BINFIELD 2nds in Division 5B.

Henley won the toss and put Binfield into bat but after an early breakthrough, Hector Williams and Mikey Allan-Canty began to score heavily.

It was Taylor who took both of their wickets. Williams was caught for 86 and Allan-Canty for 40 with the score having moved from 49-2 to 158-4.

The bowlers kept the run rate under control with Jaylan Crockett picking up two wickets and one each for Motaleb Safi and Andy Chappell as Binfield ended on 192-8 from 40 overs.

In reply, Henley got off to a shaky start with opener Charles Thomas and Andrew Hester, in at three, both trapped leg before wicket for two and zero runs respectively.

It was Chris Dyer, unbeaten on 52, and Sam Ranger, who made 47, who did most of the leg work as they got their side to within touching distance of Binfield but their opponents held on for a two-run win with Henley on
190-7.

WARGRAVE 3rds lost to SULHAMSTEAD AND UFTON 2nds by 24 runs in Division 6B.

Simon French, Joseph Neall, Edward King and Jegan Srinivasan each took a wicket as Sulhamstead reached 199-8 from their 40 overs.

In reply, Wargrave started well with openers Moss and JJ Harris making 28 and 31 runs respectively before being sent back to the pavilion.

Venu Gopal was the side’s top-scorer with 40 before he was bowled by Shane Stuart, who took four wickets in the innings.

KIDMORE END 2nds beat ROYAL ASCOT 3rds by one wicket in Division 7A.

The hosts won the toss, elected to field and quickly made their decision count.

Oliver Corbett took three wickets and Azhar Udeen, Tom Wilkinson and Oscar Fountain two apiece as Ascot was bowled out for 122 off 39 overs.

The run chase was far from straightforward as wickets fell at regular intervals.

Oscar Fountain top-scored with 25 runs but it was Callum Driscoll, unbeaten on 20, who saw his side home in the 32nd over with the score 123-9.

Thatcham won the toss and elected to bat, making 167-7 from their 40 overs.

Wargrave reached their target, hitting 168 with a ball to spare, having lost five wickets.

The third side was inserted and they were bowled out for 127 off 39 overs. Ewan Harris top-scored with 24 runs and Nathan Ruegg was the pick of the bowlers with three wickets from his eight overs.

The reply for the fourth side was led by Shankar Sundaresh, who hit 66 runs comprising four fours and four maximums.

Wickets fell in clusters but the runs were scored quickly as the fourths ran out winners with
130-7 within the 29th over.