Abundance of natural, strange and beautiful sights in these woods 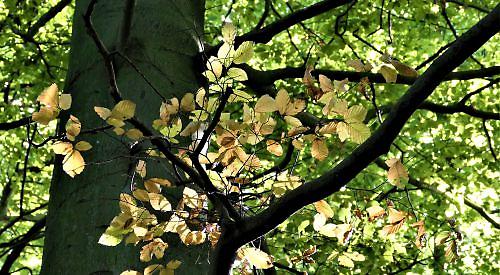 A FEW days ago, we thought to explore some of the country that we looked at longingly from Rocky Lane on our recent visit to the Greys Court and Greys Green area.

Taking advantage of fair weather, we drive back and park in the old lane in front of a large, mature beech tree.

We walk north, passing some pied and brown and white cattle in a field to our right towards a path that I don’t remember with any clarity. I’m sure that I’ve been before but then I have covered so much ground over the years.

White dead-nettle throngs the roadside with nipplewort and bracken. Lush ferns lie in the depths beyond.

We reach the local nuttery, which is in a permanent state of high manicure, and then enter a public right of way to our right. I remember it now.

We turn eastwards. Earl’s Wood stands tall to the north, Pissen Wood to the south. What an odd name.

There are some attractive lichens and mosses to be found under the tree canopy. A sign advises us not to climb on timber stacks but Rosemary, a perpetual tomboy, is sorely tempted.

There are some cracking trees in here of all shapes and sizes. Sunlight bathes the bracken and pendulous sedge under illuminated beech leaves, some turning golden.

Cherry leaves on the ground range in colour from deep red to yellow and an enormity of beech mast crunches below our feet — pigs would love to feast on this.

Rosemary is looking forward to kicking through deep troughs of fallen leaves later in the year.

There must have been a mass of foxgloves here in summer as we come across hundreds of brown, dessicated spikes that must have shed countless seeds. We’ll have to return in May or June to see the anticipated display as I’m sure that it will be quite something.

It is wondrous to see a sky devoid of aircraft. Probably they have been a main vector of the spread of covid-19.

The quiet is welcome too. We can hear an extended family of long-tailed tits as they move past through brambles, always in touch thanks to their twitterings, and the song of robins claiming their own small territories.

It will not be very long before our winter visitors arrive, redwing, fieldfare, siskins, bramblings, redpolls and, if we are lucky, waxwings. There is plenty of food for them all.

Our path takes an abrupt turn to the north east and it is mightily steep and rutted thanks to years of heavy rainfall revealing mountainous amounts of flint on chalk in the centre.

It is a bit of a struggle as the rut in the middle is very deep and we have to stop several times to catch our breath. It is a bridleway but I would not want to ride a horse in either direction.

Eventually it levels out and we find slices of tree trunks that I can only assume have been placed for children to hop on. I take a break on one of the bigger ones while Rosemary snaps away.

A big chocolate Labrador comes bounding over, assuming that I have food and proceeds to slobber all over my trousers. I note the glint of satisfaction on Rosemary’s face.

Many of the trees in here resemble those that we have seen elsewhere, some forming wondrous shapes. Notably, this woodland is not even-aged and there are plenty of saplings waiting to fill a long-anticipated void.

An enormous amount of young ash seems to be trying to out-compete beech for space. We find a young yew — I do like them. A towering oak with a near straight trunk soars above.

Further on, we encounter a beech that seems to bear an image of the Green Man. I have always been fascinated by him.

He is an ancient folkloric figure sometimes depicted wearing deer antlers, symbolic of the renewal of life through birth and death, guardian of the forest and an indicator of the earth turning through the seasons and the arrival of spring.

The Green Man is most commonly depicted in sculptures (I have six in my den), most often surrounded by a flourish of leaves that are seen to flow out of his mouth or nose.

His origins stretch back many thousands of years. It is possible to see him depicted on the outside of Christian churches but then most of our oldest were built on druidic sites in an attempt to affirm the new imposed religion.

It all reminds me of The Wicker Man, the 1973 film directed by Robin Hardy and starring Christopher Lee, Edward Woodward and Britt Ekland.

I’m reminded that there was once a pub in Highmoor that bore the name the Green Man (closed long before my time) while Green Man Cottage still stands.

There is also a link to ritual human sacrifice. To appease the heathen gods, the fittest young men were ritually slaughtered, their blood strewn on the fields to bring on a plentiful harvest. It is all a bit scary what our ancestors got up to.

Rosemary comments on the lack of fungi. You can guess what happens next as we find an abundance.

A rather strange fungus that seems new to me is growing on some other rotting wood. Rosemary hazards a guess that it is honey fungus, (Armillaria mellea) and, as I later discover from Professor Richard Fortey, she is right.

If, like me, you are interested in learning about our native fungi I recommend viewing this clip of the professor, a Henley resident, polymath, fellow naturalist and president of the Fungus Survey of Oxfordshire.

He is a great help when I get stuck with identification and he is fun too. Like many others, this woodland has an agreeable ambience to it. A grass, common bent (Agrostis capillaris), shines in open glades and holly berries are turning red.

Several broad quarries crop up between the trees. I wonder if these were for flint extraction and the building of Greys Court or its outbuildings. Some are very large indeed.

We skirt one side of Famous Copse and after a short while arrive at a crossroads in the paths near Lawrence Farm and turn south towards Greys Court along what is part of the Chiltern Way.

After a short stretch through woodland, we pass through a solid wooden gate into a green field. We stride through the pasture and head towards a second, sturdy wooden structure to cross a private road and pass through a third gate bedecked with signs.

We cross a second field full of meadow buttercups and head to gate number four, another well-crafted arrangement and find ourselves in another small patch of woodland where we find some sweet chestnut and oaks trees shedding spikily covered nuts and acorns respectively. Sunlight filters through the still-green leaves.

A dead beech has a perfect woodpecker’s hole in the side, so low down that it’s astonishing. We are greeted by a large, slimy-looking pond to our left.

Rosemary is impressed by an enormous fallen sweet chestnut tree that I saw last year. One can discern what it once was by the remains of its twisting trunk. It is home to a fungus, hairy curtain crust (Stereum hirsutum).

A decrepit old iron fence on the right ushers us on our way up a short slope with yarrow, ragwort, perforate St Johns-wort, rosebay willowherb, creeping thistle and hawkweed lining the way. Rosemary spots a clump of pink cyclamen.

As we ascend towards Greys Court, we turn around to look at the landscape that we’ve traversed and spot a sole vapour trail in the sky.

We make our way through an almost overflowing car park and on past the old building. I glance up at the tower. Rosemary tells me that it is now out of bounds to visitors for reasons of health and safety. I must admit that I always found it a bit dodgy climbing the rickety stairs to the top.

There are more fine tree specimens here, including many across the road on the hill near Greys Green.

Rosemary points out a type of Arbutus, or strawberry tree, in the near distance that is veritably huge. Maybe there are more.

There is another species that even close-up I don’t recognise. It has compound leaves like an ash but there are far too many components. I will have to ask my botanist friend in Oxford to help me identify it.

We head back to our car and on the way home stop off at the Maltsters Arms in Rotherfield Greys, one of our favourite pubs. The food and service are as great as ever. It is comfortable and friendly within. We have a tasty lunch and then leave after another sublime day out.

P.S. On Tuesday, Rosemary and I were married in the register office at Northfield End in Henley. We are very happy, all thanks to this newspaper and the editor, Simon Bradshaw, who unwittingly brought us together. Somehow, through these days of adversity and now distant sorrow, we found a shared appreciation and admiration of nature’s beauty, an immediate friendship and then true love. We’ll drink to that!