Magical woodland with strange sights like something from a fairytale 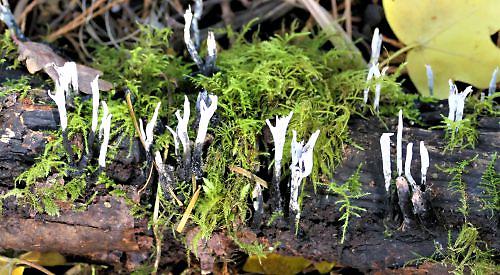 I TAKE a look at the map and suggest to Rosemary that we pay a visit to Ipsden Heath.

It is situated on high ground, initially about 185m above sea level before dipping into a valley that leads to Well Place, and is more or less between Stoke Row, Ipsden and Nuffield.

It is a large wood covering just over 31 acres and belongs to the Woodland Trust, of which we are both members. Rosemary has not been to this woodland before and is looking forward to our visit.

Despite its name, there is only a small portion of heath here on the way to Berins Hill to the west.

We park at the roadside by Three Corner Common and I guide Rosemary inside. It is going to be quite boggy underfoot but again we don’t mind, we are prepared.

We step into the wood and ride up and down what must have been an old boundary covered in golden leaves.

We come across an amazing beech tree with a double trunk that soars above us, the leaves glowing on high against a clear blue sky.

A little further in we see another beech so gnarled that I remark that it resembles poor Joseph Merrick, the “Elephant Man”, famously played in the film by John Hurt.

We stride on through the open woods filled with hollies and a little further on find some extraordinary oaks. One has three trunks, another two, and they command a clearing. Rosemary falls in love with them and asks me if we can take them home!

This is a truly extraordinary place. Fallen timber is allowed to rot as nature commands. We find some chicken run funnel fungus (Clitocybe phaeophthalma), which is strongly associated with beech trees. Dead branches are slowly disintegrating on the woodland floor, covered with bluish-coloured lichens. A white coral fungus, Ramariopsis subtilis, is growing through some mosses and displaying dinky little antlers.

Shafts of sunlight pierce spectacularly through the trees like laser beams.

There are many yew trees of various ages, some with curiously shaped trunks. Nothing much grows underneath, the ground dotted with their red, small fruits. In the past the timber was used to craft longbows.

Our path is lined with woodland grasses, some pale now, others still a vibrant green. Toppled trees and branches are all around covered with mosses and fungi. This is a genuine wild wood where nature runs its course just the way it should without human intervention.

Moving on through, we both notice the large amount of upright, dead and decaying cherry trees, the bark partially stripped. There are so many of them that it seems almost sinister. Cherries will crash to the ground at the slightest provocation and the wood goes to mush very quickly.

We find a stand of Douglas fir that was probably planted here for commercial reasons. In all probability, the trust has left them for crossbills and goldcrests.

We spot a very shapely beech with some five upright spurs from a stout bole. Rosemary is enchanted by our surroundings and already wants to come back, which we will of course.

Soon the sun is shining with great intensity through a pair of beech trees, a stunning sight. Ahead we see more sunbeams through a grove of yews. It looks like the gateway to heaven.

We are near the road that leads to Nuffield, which is busy with traffic, mainly speeding white vans. I sit on a large fallen oak to take a break, Rosemary snaps away.

When we move on we come across an ash tree that looks like it is about to walk off. I point out that some animal seems to have set up home underneath and Rosemary declares that it must be an ent, the forest shepherds in Lord of the Rings. She has a vivid imagination!

There are some of the largest whitebeams that I’ve ever seen, detectable by their fallen leaves which are still greenish above and dusky, off-white below.

The bark is like that of an apple tree, a close relative, smooth but cold to the touch. In fact, this tree is a member of the rose family.

A dead oak seems to be making a statement by projecting a bold “V”sign. We find a fallen branch covered with emerald coloured moss.

We then encounter a beech tree with a huge “Green Man” bulging forth and another sinuous beech that seems to be performing a ballet dance. This woodland is ensorcelled and trulty enchanting. Another fungus is growing on the remains of a fallen beech bough. It is beech jellydisc (Neobulgaria pura) and well named too.

We turn around to head back to the car and soon encounter a large group of horse-riders. Steam flows from the animals’ nostrils. The riders look intent on some purpose and we let them go. All of a sudden, 40 or so roe deer that had obviously been very close to us charge off through the undergrowth, terrified. What do they know?

As golden leaves fall around us, fluttering like a butterfly’s last sortie, I think of the circle of life and of part of a translation of Homer’s Iliad, book VI by Alexander Pope, the 18th century poet.

Like leaves on trees, the race of man is found,
Now green in youth, now withering on the ground;
Another race the following spring supplies;
They fall successive and successive rise.

This is the last time, we are told, that we will be able to visit a pub until early December so Rosemary drives down Berins Hill towards Well Place and onwards through Ipsden to our destination.

We pass two male horse riders who look at us with suspicion. We wonder what they are up to and pass at low speed.

I have booked a table at the King William IV at Hailey that we visited earlier in the week. It is another of our favoured inns.

As usual, there is a large flock of sheep in the pasture in front of the pub accompanied by many noisy rooks. Lots of people are dining outside in the fresh air — it is November for God’s sake!

We are greeted with broad smiles and seated in a cosy corner. As we are served our beers we pore over the menu and then our map and agree that this is indeed a lovely part of the world.

We eat handsomely and have a conversation with two women at an adjacent table. It is with a degree of sorrow that we leave and head home.

I believe that we could lose many pubs in the Henley area for good. I have a robust opinion on what our Government is imposing on us but this is not the place to express it. Good luck to all and roll on freedom.

The next day we make another brief visit to Ipsden Heath as I want to show Rosemary the small area of heathland that does still exist.

Before we emerge from the car, I point out the fruiting stems of some violet helleborines by a telegraph pole, where they are protected from flailings. A moment before we enter the heath and woodland beyond, a cyclist stops and we have a very pleasant conversation. He turns out to be Richard Parham, from the Sonning Common area. We had been put in touch through this paper as he needed help with some plant identification. We part company and off he rides. I like his bicycle.

We walk into a smallish area full of heather that carpets the ground. I’m sure that when the sun shines on it next spring and summer there will be adders here.

Silver birch trees are scattered about and there is a lonesome-looking conifer.

We make our way into the woodland but from a different angle to yesterday. Some of the tree boles are smothered with moss, some utterly beautiful. I need to learn more about these and feel the need to buy a book that will educate me.

We return home where Rosemary plants two gooseberry bushes in our back garden. Don’t worry, we are both too old to have children!

After supper, as we sit outside in the near dark, a large flock of fieldfare “shak-shak” as they fly past. What an autumn it has turned out to be.

P.S. Our cat Cilla hates fireworks and cannot bear the explosive bangs but was determined to usher us indoors to safety on Guy Fawkes night when all mayhem was let loose. She was quite intent.

The next morning our normally silent cat made as much noise as possible by whacking her cat-flap as if it were an enemy. A sign of intelligence or was she getting her own back, dear little thing?