I just nudged the door ajar for women like me 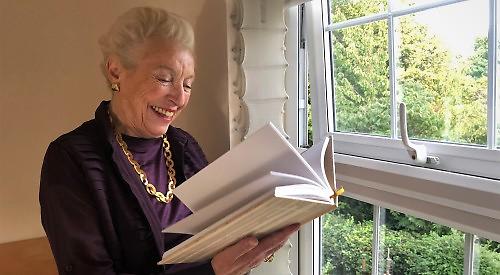 LIKE any good entrepreneur, Dame Stephanie Shirley saw opportunity in a crisis.

With life put on hold due to the coronavirus pandemic, she used the time to gather together her favourite speeches.

So To Speak is her “lockdown project” and is an anthology of 30 speeches she has given over the past 40 years.

It covers every aspect of her life, from her refugee start, her women’s software company to her son’s autism and years as a venture philanthropist and women in society generally.

Dame Stephanie, 87, who lives in Phyllis Court Drive, Henley, said: “It includes 30 speeches, which is about the number that I usually give in a year.

“To whittle them down I started off with the themes — the things that I know and really care about — and then went through each.

“My speeches in themselves are not repetitive as I never give the same speech twice but there is some overlap. Where there was overlap, I got rid of those.

“I would say that the ones I have chosen are almost classics, the best ones and the most interesting ones.

“It was fascinating going through them because I found that I had talked about emails in 1987 — that’s how far ahead I always was — so there is a lot of historic interest in them as well.”

Indeed, while the country is gripped by covid-19, forcing millions into working from home, this is nothing new to Dame Stephanie who was a workplace revolutionary.

When she set up Freelance Programmers from her dining table, aged 29, nearly all its employees were women and they mostly worked from home.

“In the shift to home working, we’re now doing what I started 60 years ago,” said Dame Stephanie.

Those early years in business are featured in her book with topics such as office workstations at home and the networked office.

Dame Stephanie came to the UK in 1939 as a Kindertransport child refugee at the age of five and it was this and relying on the help of strangers that instilled the sense of resilience in her.

And it was because she was sick and tired of “bumping up against the glass ceiling” so many times that prompted her to set up her business for women.

She also adopted the alias “Steve Shirley” because she received more replies when writing to business contacts as a man.

Dame Stephanie says her refugee start was the key to forging her career.

She said: “I’ve always felt the need to justify why I was saved from the Holocaust and make mine a life worth saving.

“My family in exile — the story of how we escaped the Holocaust in 1939 — is one of my most significant speeches. I warn you, it has brought many people to tears.

“I was given so much by total strangers and it was that which has driven my philanthropy. What else can I do but give back?”

One of her most famous speeches was titled: Why do ambitious women have flat heads?

Dame Stephanie recalled: “It is my 2015 talk given in Vancouver to an audience of thousands, including Bill Gates, and has been viewed online more than two million times.”

In it she explains that ambitious women have flat heads from being “patted, patronisingly — and we have larger feet to stand away from the kitchen sink”.

Later, she shares two secrets of success, advising to surround yourself with “first class” people and those you like and to choose your partner carefully. She then revealed that once when she referred to her husband Derek as an “angel” a woman complained to her and said: “You’re lucky, mine’s still alive!”

When the company floated three decades later, she became one of the wealthiest women in Britain — making 70 of her staff millionaires.

She now devotes her time to her other passion of philanthropy and supports strategic projects in autism research, which her late son Giles suffered from, and this is the final theme of her book. Giles passed away in 1998, aged 35.

Dame Stephanie launched three charities, Autism at Kingwood, which supports 250 adults across southern England, Prior’s Court Special School, near Newbury and Autistica, which sales from her book will support. She has given away nearly £68 million to different projects, specifically IT and autism.

She hopes the book can be a source of inspiration that people can dip in and out of when they need to.

“Inspirational is the word that people always use after hearing my speeches,” said Dame Stephanie. “You can now read the words as heard by heads of state, by academia and senior corporates as well as business women and family audiences.

“I’ve spoken in auditoriums worldwide in places of worship, eminent universities, palaces and village halls and I am always touched and uplifted by how the different audiences react.

“I feel my speeches are most effective when the audience is in tears, they have been moved, so they would have taken away the messages and feel better about themselves because the overwhelming message I give is one of positivity.

“I am a very positive and a happy person and so I want people to be inspired.”

Dame Stephanie is still writing and giving speeches and donates her fee to her charities. She said: “When I start to write a new one I look at the last speech that was even remotely on that topic, then I get rid of all the things that I don’t like any more and put new stuff in.

“I really enjoy the process, it is like being an academic, always trying to perfect and improve a piece of work, although it is very unpopular to talk about oneself as a workaholic nowadays.

“It is also really good to be able to earn some significant funds for corporate speeches and it means I can give more money to charity and I am not just coasting along.

“Working digitally you can present just as well but you don’t get the feedback from the audience so you can’t modify what you are saying based on the responses.”

Dame Stephanie believes the workplace will continue to embrace technology but believes the pandemic has been a setback for women.

She said: “The use of digital has increased in the last few months more than it has in the last 10 years and I think things like education and training will remain virtual and rather than there being offices there will be hubs where people will work.

“But what seems to have happened in the last 10 months or so is that women are more likely to have been furloughed and lost their jobs than men and if they are working from home they are doing the bulk of domestic tasks and childcare and I’m not happy about it.

“It is a long process to change a culture, it is not something that can just happen as the default position is in favour of men and things won’t change until men realise it.

“Things have definitely got better — there is no comparison to what it was like when I started — but it doesn’t mean that it doesn’t happen now. There are still things to fight for. I just nudged the door open and let other women through to have their say.”

• So To Speak is available in hardback for a minimum donation of £25. Every penny will go to Autistica. To order a copy, visit www.steveshirley.com