Eerie woodland with strangely misshapen trees and the smell of decay 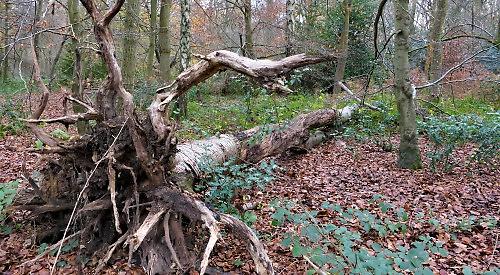 TODAY we visit Harpsden and Peveril Woods, which are owned by the Woodland Trust.

The woods are on relatively high ground on the southern outskirts of Henley close to Henley Golf Club.

They are ancient, dating back to at least 1600 AD, and a Site of Special Scientific Interest that covers an area of 73 acres on clay with flint.

The woods contain broad-leaved, narrow-lipped and green-flowered helleborines along with birds-nest orchids so I’ve got my work cut out for next year.

We gain access via Woodlands Road with its elaborately and extravagantly gated properties.

All the Woodland Trust’s woods are “open access” and these turn out to be interesting. I have not explored them for a long time and Rosemary has never been.

One of the first things we notice is the large number of cherry trees that share this environment with pedunculate and sessile oaks, holly, hazel, beech, goat willow, rowan, whitebeam and substantial silver birch.

Many of the cherries are colossal, some of biggest I’ve ever seen. I love the striations and peeling of the bark on these old specimens. They seem so vigorous and determined.

The forest floor smells fungal, as it should at this time of year, with the added scent of rotting leaves. These woods have a truly old feel to them and appear to be popular with locals walking their dogs. I feel happy to amble and even feel like skipping between the trees but Rosemary finds it a little bit surreal and eerie, which I understand too.

We walk up to a large decaying silver birch that is home to birch polypore fungus (Piptoporus betulinus). What a sight it is too as it ascends the trunk with a delicate, flimsy ladder of caps.

Like the cherries, most of the silver birches are enormous.

As we move further into the woods, there are more surprises with some areas that are open and others very dense.

We find what look like old sawpits and other pronounced excavations. Dead wood is scattered everywhere as it would be in a largely unmanaged woodland. Sunlight penetrates the dense trees, typical of this time of year. Jays squawk in the background and a green woodpecker can be heard far away. A very welcome sound.

The wood has many dedications to deceased folk that clearly enjoyed these woods. They comprise small, discreet plaques on little wooden posts and do not detract from the overall impact of the imposing landscape that surrounds them.

There is also a bench with a charming dedication in a lovely clearing. I sit on it and pledge to return next year.

Moving on, we come across a beech with a huge bracket fungus or southern bracket (Ganoderma australe). It is broad and very tough.

On a decaying branch below we are taken aback by another fungus, splitgill (Schizophyllum commune), which is whiteish and toothy looking. Sulphur tuft is ubiquitous.

As we stroll through these woods careful not to miss any interesting details, we find a beech tree with the lumpiest bole that I’ve seen. Rosemary finds it freakish.

I have no idea of the cause but it only adds to the mystery of trees for me. If anyone an explain it, please get in touch (my email address now appears at the bottom of this column each week).

We find a huge pit into which a large beech has crashed to reveal its flimsy root system. Delicate, sandy soil with small flints and other stones glint in the light. The tree will decay over time and all its nutrients will gradually be returned to mother earth to feed its successors.

A few smallish, moss-covered tree trunks are nearly horizontal bearing near-vertical branches. They are certainly not that old so I don’t know how they assumed their shape.

It is very easy to see the result of the Great Storm of 1987. The huge bases of beech trees, now in advanced decay, are coated with glorious mosses. Up close they resemble miniature rainforests.

There are plenty of Douglas fir trees which, unusually, are not planted in lines as is the norm for cash crops so I wonder how they got here.

With the light suddenly fading, we decide to leave and return the next day, which we do.

This time, we explore Peveril Wood, which is across Woodlands Road on the north-eastern side of this fascinating area.

The land dips down towards Harpsden Court and we join a public right of way that leads eventually to the valley floor.

The earthen banks to either side are steep. Come the spring, I expect a real show as this is prime orchid territory.

Many of the beech trees possess a smaller secondary trunk. Why is this, I wonder.

Later, back home again, we stumble upon some saffrondrop bonnet toadstools growing out of the leaf mulch that we have scattered on a path. It is amazing how quickly the leaves disappear.

Red campion is still in flower and setting seed. This has been a strange but encouraging year nature-wise. The magpies and jackdaws seem unusually animated. The reason is the raven is back and settled in our robinia. This bird is huge with a large, intimidating beak. After a few minutes it flies off, displaying a fan-shaped tail and broad-fingered wingtips.

Goldfinches call to one another high in the trees. A flock of redwing fly past in uncanny silence. A marsh tit with its tell-tale glossy black cap explores one of our acers.

We had a frost this morning. When I went out just after 7am the last of the leaves were falling from one of our trees with a metallic clatter.

Two short poems seem apposite. The first is by Adelaide Crapsey, an American, and is called November Night.

Listen...
With faint dry sound,
Like steps of passing ghosts,
The leaves, frost-crisp'd, break from the trees
And fall.

And then this stanza written by Percy Bysshe Shelley.

If I walk in autumn’s even
While the dead leaves pass,
If I look on spring’s soft heaven,
Something is not there which was
Winter's wondrous frost and snow,
Summer’s clouds, where are they now?

Later on, we sit outside under a darkening sky for a sundowner. Rosemary points to the moon. Partially occluded by cloud, it looks lovely and mysterious, as it has for humankind over the millennia.

We will have to wait a few months until the sun rises warm and kindly again and wild honeysuckle scents the twilight air. We know it is on the way and are eager, as is all nature that envelops us.

Even now latent buds on the trees and shrubs that we have planted this year look ready to burst. It is a super feeling to see everything geared up.

I love to draw and paint and, egged on by Rosemary, I have just bought some new canvasses, oil paints, refined linseed oil, distilled turpentine, 20 new brushes and a couple of palettes and will now resume after a
30-year break.

I intend to create images of birds, trees and landscapes around Henley which I hope to share with you here.

Apart from my excellent teacher at secondary school, the most important tuition and advice that I received came from Ilya Glazunov, a controversial artist with whom I became friends when I lived in Moscow in the late Seventies. He called me his colleague.

He died in 2017 after being given the title “People’s Artist of Russia”. Today there is a museum in the Russian capital dedicated to him and his amazing paintings.

I miss him and his generosity and wish I’d been able to see him again before his death. I still have tubes of paint that he gave me.

I hope I’ve still got the knack... with Ilya’s advice and guidance, who knows? We’ll see.