Riverside meadows with spectacular views and where wildlife thrives 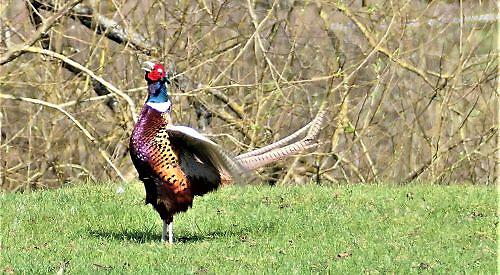 WE wake up this morning to find our cat Cilla curled up at our feet. After biting my wife’s finger, she cries out for breakfast. She’s a little devil.

It is a little chilly first thing but turns out to be a wondrous day — so warm, especially for this time of year.

Last night, Rosemary and I agreed to visit Aston and wander across the high land above the River Thames, walk past Culham Court, take in the views and see how the local wildlife is getting on.

When we arrive it is very busy with both cars and bicycles. Driving along Ferry Lane, we encounter Tony Read, landlord of the Flowerpot Inn for the last 29 years.

We stop for a chat about local issues, when the pub will be
re-opening and the local birdlife. He informs us that a pair of hobbies (Falco Subbuteo) has returned to nest in a nearby tree. This is early as these birds do not normally arrive until May.

This pair has raised young here for some years. They adopt old crows’ nests. Great news.

Incidentally, hobbies are so fast in flight they can catch swallows and they have a penchant for dragonflies.

We promise Tony we’ll visit the pub garden soon and hopefully we’ll be able to tuck into the pub’s legendary ham, egg and chips (the last beloved by the resident house sparrows).

We leave our car in Ferry Lane, walk up the road to the south and then take a left turn eastwards. We are surprised to see many trees and shrubs have been cut down in one corner.

A large quantity of box (Buxus sempervirens) has been hacked down but, strangely, all the young yew trees have been left untouched as have spindle (Euonymus europaeus) and wayfaring trees (Viburnum lantana). What is going on — is a house going to be built, we wonder?

We wander past Holme Farm with its delightful moss-covered outbuildings and tennis court.

A pink hyacinth is growing by a tree trunk next to some early flowering dandelions (Taraxacum officinale) and daisies (Bellis perennis).

We pass through a sturdy gate into open country and are assailed by the welcome song of chaffinches (Fringilla coelebs). We have none at home, alas. Blackbirds (Turdus merula) are vocal, too.

It is a pleasure to hear the song of the yellowhammer (Emberiza citrinella). These birds were common in my youth but there do not seem to be as many about these days.

Such colourful creatures, they lay the most extraordinary eggs with vermiform patterns.

Laid before us is a wide-open meadow. To our left below, the Thames looks like mercury snaking away towards London and to our right the land rises.

The views are superb. Across the river we can see the Church of St Mary the Virgin in Hambleden and the lock at Mill End.

In the short grass at our feet vast quantitues of cowslips (Primula veris) are showing off their dainty, pale yellow flowers.

Furry bee-flies (Bombylius major), with their long proboscises, hover in strong sunlight, along with hoverflies.

Noisy male pheasants patrol the ground among swathes of daffodils and in the distance Egyptian geese totter around on a cricket pitch. A cormorant perches on the branch of an ash tree. To the west we can make out a herd of white coloured deer. At a distance, I’m not sure what species they are but they look decorative.

Heading onwards, we take a turn south and uphill into a patch of young woodland. This public right of way leads to Remenham Hill.

Most of the trees have metal guards on them, presumably to deter the ornate deer from stripping the bark. A single silver birch has no protection.

Rosemary introduces me to the “witch tree”, which is aptly named. It looks weird with a scary face.

Away to the west another herd of deer luxuriate on grass in sunshine. They are fallow deer, their flanks dotted with white spots. What a lovely sight.

There are many handsome trees in this parkland. Most have broad, stout iron guards which look a bit over the top but at least the trees are cared for.

Making our way back, we discuss the patch of pyramidal orchids (Anacamptis pyramidalis) that we saw last year. They will surely show in early June.

Yellow rattle (Rhinanthus minor) has been introduced to restrict the spread of dominant grasses that would otherwise crowd out the orchids — a clever move as yellow rattle is a parasite of grass roots.

We reach our car and then wander past along Ferry Lane towards the river only to be reprimanded by a guinea fowl in an enclosure to our left pretending to protect his harem that are drinking from a puddle. You’d make a nice roast dinner, I say, and he backs off!

There are some hefty hybrid black-poplar trees here standing proudly in the damp earth.

Beneath them a vast spread of summer snowflake (Leucojum aestivum) is beginning to flower with green tipped markings on white six-pointed segments. Blackthorn is in sumptuous flower.

At the end of the lane we find some people having a picnic with mallard ducks in attendance. A young woman emerges from the river after a swim.

Rosemary feeds the ducks, which go crazy for the wholemeal bread that she tosses into the wonderfully crystal clear water.

We walk back to the car, passing some 20 others. What was once a quiet lane is now a popular destination.

Back home, we walk around the garden and plan where to plant our recently acquired whitebeam and red oak trees.

We work it out after discovering some wood sorrel (Oxalis acetosella) with its trifoliate leaves and pinky-white lilac-veined flowers. This plant is an indicator of ancient woodland but has somehow found its way in. Rosemary says she loves it.

Early in the evening a young robin flies into our house and tries to escape through a bay window at the front.

Rosemary manages somehow to get hold of the little fluttering mite from within her extensive collection of cacti. She says that it feels warm, soft and silky and she wants to keep it but then releases it in the back garden.

A few minutes later another robin flies in, doubtless in search of its errant child. It settles on the back of a chair next to me and gives me a quizzical look.

I tell the parent bird that the youngster is safe, uninjured and back outside and it departs through the open back door apparently satisfied.

Rosemary relates a story of a wren that lived among her cacti for days. She noticed tiny bird droppings and then discovered the little bird so opened one of the windows.

As she did so, it alighted on her hand and stayed there unconcerned for about 30 seconds surveying the front garden before giving a token cheep of thanks and flying off.

On another occasion a female sparrowhawk flew into the utility room with a freshly plucked bird looking “oven-ready”. Rosemary got hold of a broom to open a widow as the hawk was looking angry and dangerous. The bird departed. Rosemary threw out the bloodied remains of the prey, which promptly disappeared.

On another occasion, about 20 years ago, she discovered a fox cub hiding behind a sofa, its eyes pleading. She opened the door to the back garden and the cub sped out, leapt with joy and looked back before shooting off.